Unemployment 30 Mn Higher Than Before Crisis 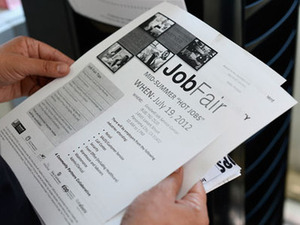 There are now 30 million more people without jobs around the world than before the global financial crisis began, the head of the International Labor Organization said in remarks published Friday.

The figures come amid a growing debate over the merits of austerity, especially in Europe, where painful budget-cutting has pushed jobless levels as high as 25 percent in some countries, including debt-hit Greece and Spain.

"Global unemployment is still more than 30 million higher than before the crisis," said Director-General Guy Ryder. "And nearly 40 million more women and men have stopped looking for work."

He said around a third of the more than 200 million unemployed around the world are under 25.

"With the world's workforce growing by around 40 million a year we face large and growing decent-work deficits stretching out years ahead.

"Of those employed, 900 million women and men are unable to earn enough to lift themselves and their families above the $2 a day poverty line."

Ryder said that figure would be 55 percent lower if the poverty reduction trend seen before the crisis had been maintained.

"This means that the damage of austerity measures has been more profound than previously thought.

"There is now an urgent need to revisit the timelines for fiscal balances, taking a much longer view of the time it will take to repair the damage done by the financial excesses of the pre-crisis period."

On Thursday, International Monetary Fund chief Christine Lagarde said too much austerity too quickly could cause difficulties, particularly if a number of economies were chasing targets at the same time.

In a news conference Lagarde said the IMF was happy for debt-addled Greece to have an extra two years to get its fiscal house in order, as new figures showed that one in four Greeks is unemployed.

"I have said repeatedly that an additional two years was necessary for the country to actually face the fiscal consolidation program."

Lagarde also warned that while the world economy was still expanding "it's certainly not growing as it should to create jobs around the world", adding that it was crucial "to make sure there are jobs available for young people".

Greece is going through a painful round of austerity and spending cuts imposed on the country in return for promised loans and debt relief worth a total of about 347 billion euros ($448 billion) since 2010.

This week the OECD said unemployment in advanced countries stood at 7.9 percent, or around 47.8 million people, 13.1 million more than at the onset of the financial crisis in 2008.

The Organisation for Economic Cooperation and Development, which provides analysis and policy guidance for 34 leading countries, noted that unemployment rates continued to vary widely in August.

The OECD said unemployment in Spain also stood at around 25 percent, while in Portugal and Ireland it was 15.9 percent and 15 percent respectively.