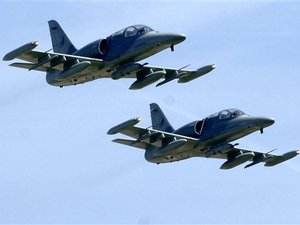 "We've agreed to supply 28, L-159-type two-seat aircraft to the Iraqi air force," Vondra told reporters on the last of a two-day visit to the Czech capital by Iraqi Prime Minister Nouri al-Maliki.

"Twenty-four of the planes will be new, while four will come from Czech army surplus stocks," he added after meeting his Iraqi counterpart Saadoun al-Dulaimi.

The L-159 jets are made by Aero Vodochody, the largest Czech aircraft producer controlled by the Czech-Slovak private equity group Penta.

The jets meet NATO standards and can be armed. Around 80 percent of their components are foreign-made, notably in the United States.

Aero Vodochody is also a sub-contractor for major arms makers including EADS, Saab and Sikorsky.

The four surplus planes will "help bridge the time needed to supply the new planes and provide room for training," Vondra said.

"They are not new planes of course, but they are very good," he said after visiting the Aero plant just north of Prague with Dulaimi and Maliki on Friday to fine-tune the deal and see the planes in action.

Vondra added the first surplus plane should be supplied within seven months following the actual signature of the deal by a delegation of experts who are due to arrive from Iraq "very soon."

"The contract will be implemented in several weeks," said Dulaimi, who was on his second visit to Prague this year.

Vondra said the deliveries of the first new jets would begin within 26 months of the signature.

The Czech defense ministry has a fleet of 71 L-159 planes which it has been trying to sell for years.

With eyes on the yet unsold L-159 planes, Vondra said the Iraq deal had "referential value" and that he expected more contracts on the heels of this one, adding the ministry would declare a public tender on October 24.

"Aero will also launch new production and the army will take part in the training," he said to name the benefits of the deal.

Dulaimi called the deal a "first step" in co-operation between the two countries, saying the ministers had also discussed an upgrade of the Iraqi army's Russian-made Mi-17 helicopters and T-72 tanks, and the training of Iraqi army officers.

Iraq has already struck a $12-billion deal to buy 36 F-16 combat fighters from the United States, which are to be delivered from September 2014.

The visit of the Iraqi delegation to the NATO and EU country came on the heels of its three-day visit to Moscow, during which Russia announced signing more than $4.2 billion in arms contracts with Iraq.

Iraq has been scrambling for means to protect its borders ever since U.S. troops withdrew from the country after nine years in December 2011.