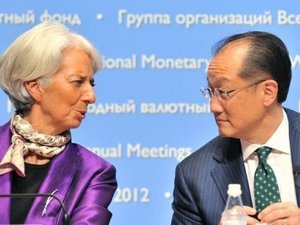 The IMF and World Bank on Saturday raised the alarm on the "humanitarian emergency" in West Africa's Sahel region, where millions risk starvation amid regional insecurity, drought and poor harvests.

"We are troubled by the acute humanitarian emergency in the Sahel region where hunger threatens the lives of 19 million people and the stability of the region," said a statement from the organizations' joint development committee.

The IMF and World Bank, which are holding annual meetings in Tokyo, called for accelerated efforts to help millions in the vast desert area "permanently escape the cycle of emergency aid".

The warning came amid preparations for an international military intervention aimed at reconquering northern Mali -- home to the fabled city of Timbuktu -- which was seized by Islamist rebels earlier this year.

In March, a military coup in the capital Bamako toppled President Amadou Toumani Toure, with the vast country's north and east falling to Tuareg rebels and militias linked to al-Qaida.

This year, more than 18 million people in the region have been hit by a severe food crisis, with some 1.1 million children facing acute malnutrition, according to the U.N. Office for the Coordination of Humanitarian Affairs.

The instability in northern Mali has led 400,000 people to leave their homes, with more than half fleeing into neighboring countries, straining the infrastructure of already poor western African nations.