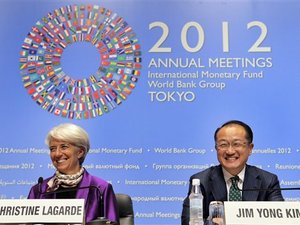 The world economy needs to balance austerity with growth if it is to recover fully from the global financial crisis, a key IMF committee said in Tokyo on Saturday.

"Fiscal policy should be appropriately calibrated to be as growth-friendly as possible," the International Monetary and Financial Committee said in a communique.

The statement came after days of back and forth between those -- led by Germany -- urging no let-up from belt-tightening and those arguing for a loosening of the grip of austerity.

International Monetary Fund Managing Director Christine Lagarde said on Thursday she was happy for Greece -- struggling under the weight of cuts demanded by international creditors -- to have two more years to meet its deficit-reduction targets.

But the following day, Germany's finance minister Wolfgang Schaeuble said there was "no alternative" to cutting bloated national balance sheets.

Speaking to reporters, Lagarde played down growing speculation of a rift on the depth and timeline for painful austerity cuts in debt-addled eurozone economies.

"There have been a lot of debates on fiscal adjustment. And what sometimes has been presented as disagreement is more about perception than reality," she said.

"We all recognise credible, medium-term adjustments are necessary in all advanced economies... (but) the pace and type of measures obviously need to be calibrated on a country-by-country basis. It cannot be one-size-fits-all."

She added that fiscal policy alone "is not sufficient".

"On these points, there was complete agreement," she said.

The International Monetary and Financial Committee, which issued Saturday's communique, is a body made of up two dozen central bankers and government ministers who advise the IMF's board on its work.

Days after the Fund warned the world's economy was growing at a slower rate than previously thought, the committee said there remained "substantial uncertainties and downside risks".

"Key policy steps have been announced, but effective and timely implementation is critical to rebuild confidence," it said.

"We need to act decisively to break negative feedback loops and restore the global economy to a path of strong, sustainable and balanced growth.

"Advanced economies should deliver the necessary structural reforms and implement credible fiscal plans. Emerging market economies should preserve or use policy flexibility as appropriate to facilitate a response to adverse shocks and support growth."

The communique said monetary easing -- like that practised by the U.S. Federal Reserve and other central banks -- had been helpful, but it was vital that "credible medium-term fiscal consolidation plans" were put in place.

"In the euro area, significant progress has been made. The ECB's decision on Outright Monetary Transactions and the launch of the European Stability Mechanism are welcome. But further steps are necessary.

"We look forward to timely implementation of an effective banking and a stronger fiscal union to strengthen the monetary union's resilience, and structural reforms to boost growth and employment at the national level."

Asked about eurozone powerhouse Germany's reluctance to allow Spain access to the ESM, the bloc's new 500-billion-euro war chest, Lagarde said it was a matter for European countries.

"We collectively acknowledged and praised actually both (Germany and Spain) and the European Central Bank for... completing the incorporation and capitalisation of the European Stability Mechanism.

"So the tools are there. but in terms of using them, clearly it's up to them to decide when it is appropriate."

Spain would like the ESM to be able to recapitalise its banks directly, so as to lessen the sovereign debt load, but Germany, the Netherlands and Finland have said this will not be possible until a cross-border mechanism for bank balance-sheet supervision is in order.

The communique said Washington had to resolve the looming problem of the so-called "fiscal cliff" -- a collision of tax hikes and reduced public spending due to hit early next year.

Observers have warned this could knock the already-wobbly U.S. recovery off track.

The committee said that Japan, the world's third largest economy, which has struggled to refloat itself after a series of set-backs, including the quake-tsunami disasters last year, needed to secure funding for this year's budget.

The Japanese government has warned it could soon face shutdown if a deadlocked parliament does not take its foot off the brake and allow it to borrow more money.