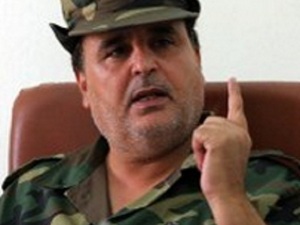 Fighters in Bani Walid say they are ready to lay down their lives to defend the besieged town of jagged hilltops which gave shelter last year to loyalists of slain Libyan leader Moammar Gadhafi.

"They'll have to march over our dead bodies to reach Bani Walid," said commander Salem Waer who is leading military operations in the oasis town circled by armed groups operating under orders of Libya's new authorities.

Bani Walid, 170 kilometers (110 miles) southeast of Tripoli, was one of the last towns to fall to anti-Gadhafi rebels in the 2011 conflict that toppled the long-time dictator.

Many Libyans feel it was never truly "liberated" and see it as a shelter for regime loyalists and criminal gangs.

It came back into focus last month after the death of a former rebel from Misrata who was credited with capturing Gadhafi and later kidnapped, allegedly tortured and shot in Bani Walid.

Acting on the national assembly's order to hunt down the perpetrators, army troops and brigades made up of ex-rebels encircled Bani Walid in early October and threatened to "purge" former regime remnants.

The road partially reopened on Wednesday allowing a flow of essential commodities and fuel into the town, a stronghold of the powerful Warfalla tribe, which decried its "state of siege."

Life appeared normal in the center of the town on Thursday but fighters from Bani Walid have been clashing daily with armed groups from Misrata in the nearby valley of Mardum, 10 kilometers east of Bani Walid.

The death of former rebel Omar ben Shaaban, 22, stoked tensions between Misrata and Bani Walid, neighboring but historically rival cities which found themselves on opposite sides of the 2011 conflict.

The General National Congress (GNC), the highest political authority, ordered the defense and interior ministries on September 25 to find those who held him hostage for weeks in BaniWalid and authorized the "use of force if necessary."

Ten days of skirmishes in Mardum have killed a total of four people and left more than 60 wounded, according to Salah al-Mabruk, director of the main hospital.

Residents and other medics in the town have given higher figures in the past days.

"It is our legitimate right to defend ourselves," said Salah Abdel Jabbar, a tribal leader who heads the social committee in the absence of any state presence in the town.

He denounced the GNC order as illegitimate.

"This decision was taken by only 50 (out of 200) representatives. Moreover, such a decision can only be taken by the judiciary. It is a dangerous move, unprecedented in the world. How can they punish and destroy a city just to arrest people?"

Many residents say that the death of Shaaban is being exploited for more sinister ends and accuse "lawless Misrata militias" of shelling residential areas indiscriminately.

"The death of Omar ben Shaaban is just a pretext" said one. "There is an agenda to invade us. What we are witnessing are the preludes to a civil war."

An AFP team visited three homes in the town which were hit by rockets.

Residents said they have also been attacked with "toxic gases" and a doctor in the town told AFP he had treated 26 patients with "odd" symptoms of intoxication, including vomiting and trembling limbs.

"It is the first time I see such symptoms but we cannot conclude that toxic weapons have been used," said the medic, adding he brought the cases to the attention of a visiting team of the International Committee of the Red Cross.

A tribal Warfalla leader has no doubt about it: "They are trying to liquidate us and accuse us of being pro-Gadhafi."

"If carrying out a revolution is an honor, then we were the forerunners," said the chief in reference to a 1993 failed coup attempt which was launched by Warfalla tribesmen.

Those who participated in the coup were later executed or arrested.

The declaration "1993: We made history" is written on the walls at the entrance of Bani Walid in a bid to remind hostile rivals of the Warfalla-led uprising which predated the 2011 revolt.