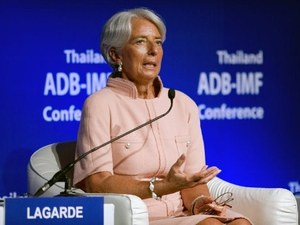 Women could rescue Japan's chronically underperforming economy if more of them went to work, the female director of the International Monetary Fund said Saturday.

Christine Lagarde said Japan's shrinking and greying workforce, which has left the country struggling to pay welfare bills, could really benefit from an injection of female talent.

"Because there is this ageing problem... we believe that women could actually help very much," Lagarde told reporters in Tokyo, where the IMF is holding its annual meetings.

"It's critically important the world over but it's particularly important in Japan," she said, referring to IMF research on the role of women in the country "that indicates that women could actually save Japan".

"Today you have five out of 10 Japanese women out of the job market, as opposed to two out of 10 men," she said.

Lagarde said if there were "better kindergartens and better assistance and cultural acceptance that women can actually do the job, it would be excellent for the Japanese economy", she said.

Despite high levels of education, many women drop out of the workforce when they have children, and social pressures to play the homemaker remain.

Lagarde, a former finance minister of her native France, was speaking after Bank of Japan governor Masaaki Shirakawa stressed the importance of raising the labor participation rate of elderly people and women.

"If we could succeed in raising the participation rate, then the growth of labor force will be reversed from a negative territory to a positive territory," he told a seminar.

Japan's population is declining and ageing as young people increasingly put off starting families, seeing them as a crimp on their lifestyles and careers. The slow economy has also discouraged young people from having babies.

Japan's population last year shrank at the fastest rate since comparable records began, dropping by a record 0.2 percent, to an estimated 127,799,000 as of October 1 last year. It is expected to shrink dramatically over the next few decades.

The proportion of people over the age of 65 stood at 23.3 percent, an all-time high and the highest percentage in the world, according to a government survey.