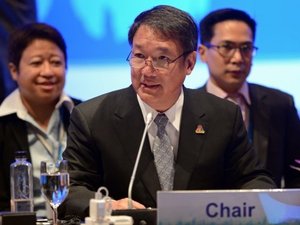 Senior finance officials from Asia and Europe met Monday for talks on the global economy in the face of growing nervousness about the worldwide fallout of the eurozone debt crisis.

The meeting in Bangkok comes as Asia's economies -- for years seen as a bright spot in a gloomy world economy -- show increasing strains from Europe's financial turbulence.

"With the ongoing economic difficulties of some countries in the eurozone, I believe that our cooperation is even more crucial than ever," Thai Finance Minister Kittiratt Na-Ranong said in opening remarks.

"Because Asia and Europe are closely knitted in terms of international trade and investment, one spark of crisis could cause turmoil in the other side of the world," he added.

With Europe gearing up for a crunch summit on Thursday, many finance ministers sent their deputies to attend the biennial meeting in Bangkok, which sets the scene for an Asia-Europe (ASEM) summit in Laos next month.

Hopes that Asia's economies would largely shrug off the West's economic troubles have been doused by a slew of weaker-than-economic data in recent weeks.

Experts say that Asia's trade-dependent economies are vulnerable to any further turmoil in the West.

"A sudden and rapid deterioration of the global economy would hit Asia hard," analysts at the London-based research firm Capital Economics warned in a research note.

But while Asia will not be immune to the eurozone crisis and weak global demand, "healthy fundamentals and plenty of scope for policy easing mean growth should hold up relatively well over the next couple of years", they added.

As powerhouses China and India slow more than many had expected, the Asian Development Bank and International Monetary Fund both recently lowered their growth estimates for the region's emerging economies.

The IMF said last week that growth for developing Asia would come in at 6.7 percent this year and 7.2 percent in 2013, compared with July's estimate of 7.1 percent and 7.5 percent.