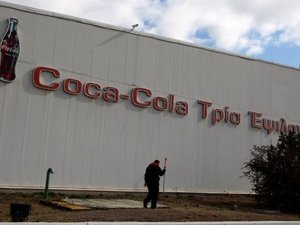 Coca-Cola's second biggest bottler worldwide, Athens-based Coca-Cola Hellenic (CCHBC), on Thursday said it was moving its headquarters to Switzerland and looking to establish a listing on the London stock exchange.

This followed an announcement by Fage, one of the country's main dairy producers and a major exporter, that it was moving its headquarters to Luxembourg "to better reflect the increasingly global nature" of its activities.

Greek companies have been relocating to lower-cost neighboring markets such as Bulgaria for years, a process accelerated by wave-upon-wave of austerity cuts and sales tax hikes over the past two years that have felled consumer demand.

But in a week when German Chancellor Angela Merkel was in Athens pledging to support growth initiatives in return for further budget savings, the news wreaked havoc in Greece.

"I cannot tell each and every company how to act, nor can I impose police measures to influence strategic decisions made by companies," Greece's normally mild-mannered Development Minister Costis Hatzidakis told reporters.

"The climate has markedly changed compared to the past. I will not say it's all gardens of roses ahead of us...but if we can cover this final stretch, and with (EU) support, companies will not leave and others will start returning to the country," the minister argued.

Hatzidakis has spearheaded efforts to get money pumping back into the country in the form of loans from the European Investment Bank.

The EIB is to release some 1.44 billion euros ($1.86 billion) by 2015 to support projects that have ground to a halt such as highway construction.

The money will partly cover debts owed by the Greek government to the private sector, now estimated at around eight billion euros.

"In conjunction with austerity measures and structural reforms, which demand a great deal from the people, there must also be growth stimulus," Merkel told reporters this week after talks with Greek Prime Minister Antonis Samaras.

"Therefore, we will support everything possible to provide Greece access to credit from the European Investment Bank," she said.

With a sixth year of recession in sight and with little hope of winning a decades-long battle against red tape, Greece has labored to attract investors even in the midst of an unprecedented privatization drive.

Under the terms of its EU-IMF loan rescue, the country is obliged to offload some 19 billion euros ($24.5 billion) in state assets by 2015 but has so far managed around a tenth of that total.

Forced to take part in a state debt rollover, Greek banks have slowed business loans to a trickle.

And there was speculation earlier this year, during a Greek political deadlock that took two elections to produce a workable government, that the country could even be forced to leave the euro.

French supermarket giant Carrefour and banks Credit Agricole and Societe Generale have all recently taken steps to extricate themselves from Greece as well.

These are precautions not unrelated to so-called 'Grexit' fears, concern that Greece may return to a devalued Drachma, rating agency Fitch said in a Friday note with respect to Coca-Cola's move.

But it added that what CCHBC and Fage did were "limited precedents" for other eurozone corporates for now, "despite incentives to ... protect against the risk of a full-blown sovereign crisis."

Both Coca-Cola Hellenic and Fage claimed they were not abandoning Greece.

"We are a Greek multinational company having its headquarters in Switzerland," CCHBC chief executive Dimitris Lois said in a conference call.

"Having a new headquarters in Switzerland will provide stability that will be evaluated by credit agencies...more stability, that's what we are looking forward to," he added.

CCHBC said the move would also improve access to equity and debt capital markets and increase its flexibility in raising new funds.