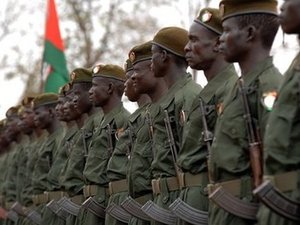 Clashes between south Sudan's army and rebel militiamen killed at least 55 people, a government official said Sunday in the soon to be independent state gripped by a bloody wave of unrest.

The fighting raged for about three hours on Saturday in Jonglei state between the southern Sudan People's Liberation Army (SPLA) and gunmen led by former militia leader Gabriel Tang, also known as Tang-Ginye.

"The shooting started in a place called Kaldak on Saturday morning, and there was heavy fighting," said Peter Lam Both, information minister for Upper Nile state, speaking from the state capital Malakal.

"Around 50 soldiers from Tang-Ginye, and five of his generals were killed."

There were no details of any deaths from the SPLA, but Both said dozens of wounded troops had been brought to Malakal for treatment.

"In the hospital here we have 34 SPLA soldiers wounded and 43 civilians," Both told Agence France Presse.

South Sudan is reeling from a series of violent rebellions that have already soured the mood ahead of full international recognition in July, with at least seven separate militia groups battling the southern government.

More than 800 people have been killed and 94,000 people forced from their homes in fighting since January, according to UN estimates, when southerners voted overwhelmingly for their own nation in a largely peaceful referendum.

Tang commanded a pro-Khartoum militia during the devastating 1983-2005 civil war between the north and the south, but agreed to join the southern army late last year.

His troops were due to be formally integrated into the SPLA, under an agreement reached last week, with Tang taking the post of Lieutenant-General, Both said.

However, his fighters reportedly refused to follow orders to travel to the southern capital Juba, sparking Saturday's battle.

"Tang-Ginye's forces have scattered into the bush, and there are no reports of fighting so far today," Both said.

"We don't have exact information about Tang-Ginye himself, but he is believed to be with his forces," he added.