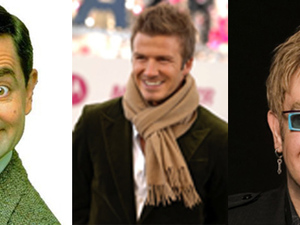 David Beckham, Elton John and Mr. Bean actor Rowan Atkinson will mingle with dozens of royal guests at Prince William and Kate Middleton's wedding, according to an official guest list released Saturday that includes one uncomfortable presence — the Bahraini crown prince accused of a brutal crackdown on protesters.

St. James's Palace also released the seating plan at Westminster Abbey, which showed that relatives of William's mother Princess Diana are sitting across the aisle from the royal family, joining the Middletons in an exception to the traditional division of a church into a bride's side and groom's side.

There was no explanation of the seating arrangement, but the Spencers have not had a good relationship with the royal family, especially after Diana's brother Charles Spencer attacked the royals during a speech at her 1997 funeral.

More than 46 foreign royals are seated behind the British royals. They include Bahrain's Crown Prince Salman bin Hamad Al Khalifa, an invitation that could prove awkward in light of his government's rough treatment of mainly Shiite pro-democracy protesters.

Some human rights campaigners have started to petition Foreign Secretary William Hague to revoke the invitation, saying the prince should not be allowed to attend the occasion. At least 30 people have died in Bahrain since mid-February, including four who died while in official custody, and many well-known activists and lawyers have been imprisoned.

Other foreign royals who are attending include those from Denmark, Norway, Spain, Saudi Arabia, Thailand and Morocco. Only a handful of celebrities are invited, including the Beckhams, director Guy Ritchie, soul singer Joss Stone, and Atkinson — a close friend of William's father Prince Charles.

Although about 1,900 guests have been invited to the couple's wedding ceremony at Westminster Abbey, half of them will sit in the section of the abbey where views of the altar are restricted, and they will have to rely upon video screens to follow the service.

Queen Elizabeth II and other royal family members will sit in the front row across the aisle from Middleton's parents and brother James. They will be closest to the abbey's sanctuary, where William and his bride will stand.

Foreign dignitaries, the Middletons' family friends, British government and defense officials, families of British soldiers killed in Iraq and Afghanistan, William's army colleagues, and people who work for William's charities will be seated around the abbey.

Palace officials said that only crowned heads of states are traditionally invited to royal weddings, and that political leaders who are not from the 54-member Commonwealth of nations, such as President Barack Obama or French President Nicolas Sarkozy, weren't sent invitations.

About 600 of the guests will then attend a champagne and canapes reception at Buckingham Palace hosted by the queen.