Miqati in Saudi: I'm Doing What My Conscience Obligates Me to Do, Protecting Lebanon from Vacuum 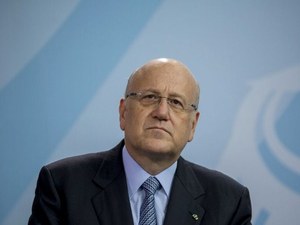 Prime Minister Najib Miqati on Tuesday stressed that he is doing what his conscience obligates him to do – “protecting Lebanon from political vacuum and divisions,” amid calls by the March 14 forces for him to resign.

“With my arrival in the holy city of Medina, I will start praying to God Almighty to protect Lebanon and the Lebanese from any evil,” Miqati said on the social networking website Twitter, after he arrived in Saudi Arabia to perform the hajj pilgrimage.

Miqati -- who resumed his duties Tuesday at the Grand Serail ahead of his trip to Saudi Arabia -- had warned on Monday that “irresponsible street action serves the plot of the criminals who want to drag the country into chaos and strife," one day after angry mourners tried to storm the Grand Serail – the government's headquarters – and in the wake of deadly clashes in Tripoli and Beirut.

“The objective behind the assassination of (Intelligence Bureau chief) Maj. Gen. (Wissam) al-Hasan is undermining stability and civil peace,” Miqati said on Twitter.

“We will press on with the investigations into the Ashrafiyeh bombing until the end, so that truth can be unveiled to the public opinion,” he added.

“I am surprised. Is this how you reward the one who protected positions and symbols in state institutions?” Miqati wondered, referring to the time he defended al-Hasan and ISF chief Maj. Gen. Ashraf Rifi against campaigns demanding that they be sacked.

The opposition March 14 forces have called on Miqati to resign, in the wake of al-Hasan's assassination in a massive rush-hour car bombing that also killed his bodyguard and two other people and left more than 100 others wounded.

Several people were injured as security forces used tear gas on Sunday to repel demonstrators trying to storm the Grand Serail, the headquarters of the Lebanese government in downtown Beirut, amid calls for Miqati to resign.

Following the funeral nearby of Maj. Gen. al-Hasan, young people headed towards the building in the city center, but security forces blocked them by firing into the air and using tear gas.

During funeral orations for al-Hasan and his bodyguard Chief Warrant Officer Ahmed Suhyooni, former premier Fouad Saniora called on Miqati to resign and stressed that the March 14 forces will not engage in dialogue before the government's departure.

your cabinet is vacuum already... what did it do so far? nothing for the citizens.

your insults only prove your lack of arguments as usual... but it s the weapon of the weak and cowards, no wonder from a supporter of a regime that kills innocent lebanese people...

Kheir, the guy will be out as of May 2013. The next step will be the Syrian people asking for their money back after Bachar is dealt with. Let's not forget that Miqati is billionaire.... Yes but with Syrian corrupt money. (entirely)

why would a sovereign government made up of people loyal to lebanon and who outside the main political parties be a vacuum? you are empowering syria and hezbolah and all the syrian agents to kill and rule..

where are those little M8 virgins to tell that mikati, their PM, is taking orders from the wahabbis as they usually whine when an M14 goes there?