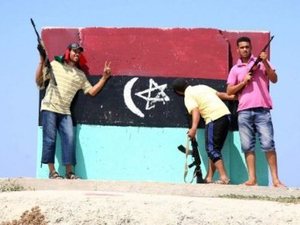 Libya on Tuesday celebrated the first anniversary of its "liberation" from the regime of Moammar Gadhafi, even as fighting flared in a former bastion of the slain dictator.

On October 23, 2011, just three days after Gadhafi was captured and killed in his hometown Sirte, the transitional authorities declared the country's liberation, formally ceasing hostilities.

The day was observed as a public holiday across Libya.

Cars cloaked with the national flag cruised the capital from the early morning, their speakers pumping out patriotic songs at full volume. People gathered at Martyrs Square after sundown with youths setting off fire crackers.

In Benghazi, hundreds of people massed outside Tibesti Hotel to mark the one-year anniversary but also demand that the eastern city, cradle of the uprising that toppled the regime, become the "economic capital."

Fierce clashes in Bani Walid, one of the final bastions of the former regime and accused of harboring die-hard Gadhafi loyalists, have cast a pall over celebrations.

De facto Libyan leader Mohammed Megaryef expressed confidence on Tuesday that the military operation in Bani Walid would finish "very soon". He expressed regret over the casualties of the fighting.

In a speech broadcast by state television, Megaryef emphasized that the assault specifically targeted the "criminals who held the town and its residents hostage," rather than Bani Walid as a whole.

He called for national reconciliation and the reactivation of the judiciary.

Earlier, columns of smoke rose over the hilltop town according to an AFP photographer on the northwestern edge of the town. The sound of shooting and explosions rang out in the valleys below.

Dozens of foreign workers continued to flee on foot, he added.

"Since the formal declaration of the end of hostilities, Libya has become a country beset by intercommunal strife," said Claudia Gazzini, senior Libya analyst for the International Crisis Group.

"The central authorities have acted chiefly as bystanders, in effect sub-contracting security to largely autonomous armed groups only nominally under the authority of the state," she said.

Bani Walid natives, angered by the government-sanctioned offensive against the heartland of the powerful Warfalla tribe, stormed the national assembly on Saturday in protest.

Demonstrators also ransacked the offices of a private television station in Benghazi after it announced that Gadhafi's son Khamis and the dictator's spokesman Mussa Ibrahim had been captured there.

The authorities never presented evidence to back these claims and the Bani Walid natives said these reports were fueling attacks on their town.

Last week's scaled-up offensive against Bani Walid came in response to the death of Omran Shaaban, 22, a former rebel from the city of Misrata who was credited with capturing Gadhafi.

Shaaban spent weeks held hostage in Bani Walid, where he was allegedly tortured, before the authorities managed to broker his release.

He later died of injuries sustained during the ordeal, stoking tensions between his hometown Misrata and Bani Walid, long-time rivals who fought in opposite camps of the 2011 conflict.

The incident galvanized the authorities to tackle the bastion of the former regime.

Dozens of people have been killed and hundreds more wounded during clashes between pro-government forces and Bani Walid fighters over the past week. The bitter fighting has evoked recent memories of the civil war that toppled Gadhafi one year ago.

To justify the offensive, Megaryef, president of the national assembly, said the oasis had become "a sanctuary for a large number of outlaws and anti-revolutionaries and mercenaries."

The authorities, they say, are powerless to stop them.