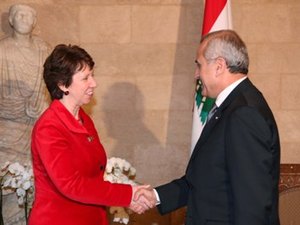 Praising efforts to maintain stability and warning against political vacuum, she stressed to officials the importance of state institutions that continue to ensure security and provide services.

Their role cannot be understated, a close source to the presidency quoted Ashton saying.

“At such times, the importance of robust state institutions that continue to ensure security and provide services cannot be understated,” she added.

“I welcome the efforts undertaken to maintain stability through national dialogue and encourage all political leaders to work towards constructive solutions to the main challenges facing Lebanon today,” she said.

Ashton's meeting with Berri was productive, sources said and she reiterated the EU’s position, which calls for the Lebanese government not to resign to avoid plunging the country into a power vacuum.

Miqati had announced his desire to resign following last week’s assassination of Hasan and the March 14-led opposition has also been urging him to step down.

Earlier Tuesday, Ashton told Miqati that the EU is ready to support the Lebanese army, and reiterated the necessity to preserve stability and to evade any political vacuum, hailing the positions of Miqati to maintain the cohesion and integrity of Lebanon during these difficult circumstances.

During her meeting with Qahwaji, Ashton stressed the necessity to hold the parliamentary elections on time.

Hasan was killed on Friday in a car bomb attack in the Beirut district of Ashrafiyeh.