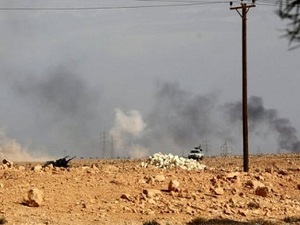 Libyan pro-government forces on Wednesday seized control of Bani Walid, one of the last bastions of Moammar Gadhafi's ousted regime, an AFP correspondent in the town said.

Hundreds of fighters, mostly former rebels from the rival town of Misrata, converged on the center of Bani Walid, firing in the air to celebrate and hoisting the Libyan flag on abandoned public buildings, he said.

Some of the fighters blasted the walls and windows with anti-tank rockets and Kalashnikov rifles.

Several rebel chiefs, whose fighters patrolled in vehicles mounted with heavy weapons, told AFP the town was "almost liberated," with only a few pockets of resistance left in its southern sector.

The town itself was deserted, with residents and foreign workers having fled since Sunday.

Fierce clashes in Bani Walid, which was accused of harboring die-hard Gadhafi loyalists, cast a pall over celebrations for the first anniversary this week of the overthrow of his regime in a bloody conflict.

A scaled-up offensive against Bani Walid since last week came in response to the death of Omran Shaaban, 22, a former rebel from the city of Misrata who was credited with capturing Gadhafi.

Shaaban spent weeks held hostage in Bani Walid, where he was shot and allegedly tortured, before the authorities managed to broker his release.

He later died of injuries sustained during the ordeal, stoking tensions between his hometown Misrata and Bani Walid, long-time rivals which fought on opposite sides of the 2011 conflict, and galvanizing the authorities to act.

The victorious fighters on Wednesday carried a massive portrait of Shaaban.

Clashes between pro-government forces and Bani Walid fighters over the past week killed dozens of people and wounded hundreds, in scenes evocative of the civil war that led to Gadhafi's overthrow and death.