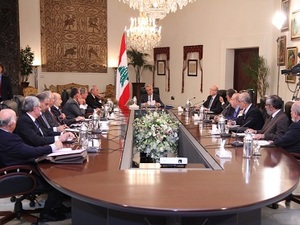 As Arab and international concerns mounted over securing civil peace in Lebanon and warding off any negative repercussions of the Syria crisis on Lebanon, it was clear that there is Arab-international consensus to protect Lebanon from the crisis, encourage Lebanese factions to resume dialogue, and preserve the role of state institutions, sources close to the presidential palace in Baabda told the daily.

“Parties that refuse to participate in the national dialogue are indirectly agreeing that the the current government should carry on with its tasks,” the sources said, referring to the opposition March 14 alliance's decision to boycott the parliamentary sessions and the national dialogue unless the cabinet resigns.

“It is a shame that neighboring countries fear for Lebanon's interest more than the Lebanese themselves,” the sources added, reiterating the necessity to resume the dialogue sessions in light of the critical situation the country is witnessing.

“If the Syrian crisis is heading to a political settlement, then that presses the Lebanese to accelerate the healing process and reunite them to engage in dialogue,” the sources added on condition of anonymity.

“Although the assassins of Hasan were aiming at triggering security vacuum, it is our duty as Lebanese not to help them any further by boycotting parliamentary work and thus causing political and constitutional vacuum,” they noted.

Hasan was assassinated last week in a massive car bomb in Beirut's Ashrafiyeh district that killed three and wounded more than 100.

The daily quoted the sources as saying that President Michel Suleiman, as a sponsor of all Lebanese components, was keen to take the problem off of the streets by calling for a national dialogue session.

The sources held parties that refuse to participate in the session responsible for their actions.

Hailing the achievements of the centrists in the cabinet, the sources said: “The cabinet was able to achieve a number of issues never achieved since 2008, particularly in public services, administrative appointments and funding the Special Tribunal for Lebanon.”

The March 14 General Secretariat reiterated its stance in its weekly meeting Wednesday that “toppling the government (of Premier Najib Miqati) is necessary to counter danger and achieve stability.,”

For its part the al-Mustaqbal parliamentary bloc demanded the formation of a neutral cabinet and said during its weekly meeting Tuesday: “We will not take part in any dialogue session or parliamentary meeting until the cabinet resigns.”

Earlier this week, head of the Mustaqbal bloc MP Fouad Saniora briefed Suleiman, during a visit to Baabda on Monday, on the March 14 stance.

if this cabinet does not resign, then let m8 assume the results which will be catastrophic.

you are the traitors for allying with the syrian regime and iran against your country. so please STFU.
we do need lessons from traitors.

treacherous? look who s talking! the one supporting a party that pledge allegiance to an islamic revolution! pledging allegiance means to obey in case your twisted mind doesn t know the definition! this is far worse than having allies, which all countries have! having allies you can change them or not listen to them!

you don t have better arguments?
stupid and irrelevant as usual....you cannot deny that hezbos obey iran so you find idiotic examples that have nothing to do with what i write just to try and look intelligent...

National dialogue session: been there, done that, got the t-shirt. Only outcome was postponing and delaying the (un)holy disarmament of illegal Iranian weapons.

No talks, no negotiations - otherwise we may become liable of their crimes by association. If this means they stay in power: let them! They created the mess, let them clean it up themselves. The longer they are in power, the more obvious their unholy and un-Lebanese agenda becomes. Let the world and the Shiite community finally realise what vipers are living amongst us. Time to wake up!