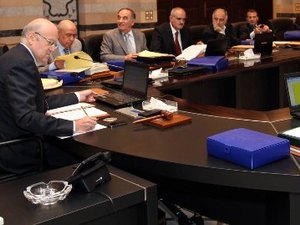 Arab and international stances on the current situation in Lebanon are likely to change soon becausereports received by most of these powers on the assassination of Internal Security Forces Intelligence Bureau head Brigadier General Wissam al-Hasan were “inaccurate”, a prominent source of the opposition March 14 alliance told the pan-Arab al-Hayat daily on Saturday.

“Most of these sides received inaccurate reports on the assassination," it said.

"The reports did not reflect the real situation in Lebanon and therefore, we expect a change in the Arab and international stances by the beginning of November,” the source told the daily.

It added: “Most reports to Western embassies in Lebanon considered, in the first moments of the assassination of Hasan, that the regime in Syria aims to export its crisis to Lebanon, and was betting on creating a power vacuum."

“That however could drag the country into the unknown and therefore Lebanon must be spared any attempt to spread the crisis from Syria,” it continued.

“European embassies are not only afraid of the confusion that would befall Lebanon under the insistence of the Syrian regime to export its crisis to Lebanon, but from the effects that could touch the role of the United Nations Interim Force in Lebanon south of the Litani River,” the source said.

It remarked that European ambassadors to Lebanon were confused over whether to support Lebanon's state and its institutions or back the current cabinet.

It noted that the "change in American and European stances on Lebanon stemmed from the international community's position that backs a change in government, but leaves the decision to Lebanese powers because it is an internal affair.”

The March 14 camp has been demanding the formation of a neutral cabinet that oversees the 2013 parliamentary elections, stressing “no need for dialogue as there are no differences on the ministerial statement which should remain under the same roof of the Baabda Declaration.”

Hasan was assassinated in a massive car bomb in Beirut's Ashrafiyeh neighborhood that left three dead and more than 100 wounded. The assassination was widely blamed by the opposition on the Syrian regime.

Miqati announced last week that he does not hold on to the position of premiership and that he suspended any decision on his resignation until he holds consultations with Suleiman and the political parties.

They expressed support for the stability and continuity of government activity in Lebanon.

They accused the cabinet of “covering” the crime and blamed the regime of Syrian President Bashar Assad for the killing.

Inaccurate reports? Don't they read naharnet? Or they lack intelligence in their intelligence agencies. They just want to bury Lebanon, once and for all. M14 expects a lot of things, and nothing will happen or change. You are right accordionman.

Whatever it is, the real problem is to remove Syria and Iran's cronnies from power in Lebanon, to instill security all over and to make peace with our neighbours. The rest will follow.

In other words, they are begging their investors to support Saad Hariri's attempt to avenge his sacking as PM.

What a shame Lebanon has resorted to out right, public begging from our "leaders".

I invite readers to compare this assassination with that of Rafic al-Hariri, and whom are its beneficiaries: March 14 moviment, and its allies willing to form a Government, USA and Israel, some Arab countries allied to the East, but not Syria unwilling to open another front (they hardly are managing their present problema in Syrian territories). Think about it Lebanese people.

of course not they are no masters of their own fate and how could they be. In front there is HA, Syria and Iran. No tender sweet guys that are threatening and killing M14 leaders (you may or may not believe it). Do you think that they have the capabilities to withstand this by themselves. If the lebanese count on themselves solely than it would be another story.

Good to hear this from you. remember though the minister of culture Layoun did not agree on mentioning the cedar revolution in the history book.

I agree with you, I condemn the rioting but understand what happens as the M14 cannot stand no more the succession of aggressions they are subject to. Demonstrations happen in every civilized country and there is nothing wrong with it as long as it does not generate in uncontrolled violence.
What is sad is the strong partisanism in this country where every move from one side is politicized to no limits.
M14 have the total right to demonstrate and express their anger as plural political life is being eliminated by the killing of all leading M14 figures and by the threats of HA on our political life.