Hollande to Suleiman: Lebanese Should Give Priority to Country's Interests 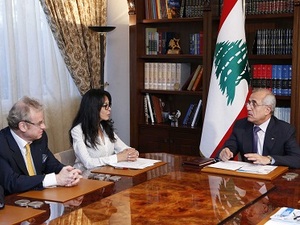 French President Francois Hollande stressed on Saturday his country's “full support” to Lebanon and its people, calling on them to put forward their country's interests above all else.

He expressed France's “solidarity with Lebanon and its people,” considering that the “murder aims at destabilizing the country and paralyzing its institutions.

Hollande called on the Lebanese in a letter handed over to Suleiman by French Minister of Francophone Affairs Yamina Benguigui “to place the interests of their country above all others to maintain stability.”

He reiterated his country's commitment to “stability, security, independence and sovereignty in Lebanon.”

The assassination of Hasan last week has raised fears about unrest in Lebanon, which is divided between supporters and opponents of Syrian President Bashar Assad, whose country supervised its small neighbor for nearly 30 years.

The October 19 Ashrafiyeh bombing in Beirut that killed Hasan along with two others deepened the gap between the March 14 alliance and the March 8 camp.

The president is carrying out consultations with rival political parties to convince them to resume the national dialogue.

The March 14-led opposition insists on the resignation of the government as a main condition for the resumption of the national dialogue and official activity with their foes, while the March 8 coalition rejects the formation of a new cabinet on allegations that there is no alternative for it.

A Patriot (Guest) over 7 years

Most Lebanese do... You know the ones that don't... It does not take a genius to figure out who they are... their leaders are hiding underground somewhere south of Downtown Beirut or in some bunker in the Rabieh zip code...

Sorry Froggy, can't do it as per my consultant's advise. They tell me that our priority is collecting body parts.

Hollande..you should give priorities to French interests and stop pandering to the Israeli lobby in France like a prostitute. Most Lebanese refuse to be collaborators with the Israeli/Western enemy, and will resist by any means necessary.

Let me try combine the posts of Patriot and bigjohn hopefully into a uniting statement. Most of our politicians have been trading Lebanon's interests for their wealth or power (some are hiding underground and others are not). This is how they accumulated their wealth and power while the majority of the population struggle to make ends meet. And the ones that are patriotic and honest either murdered or have so few followers that no one pays attention to them.
And bigjohn, allow me to add Syria and Iran to your last sentence and then I will be with you.

Hollande and Suleiman agreed that they have a remarkably similar domestic national security agenda. Islam must never become a vehicle to democratic power. Look (they say to each other) what the Polish Catholicism-based Solidarity movement did to the Soviet Union and Warsaw Pact. Lebanon's situation is more acute in that the Shiites, the majority of the population but disenfranchised under the so-called Taif Accord, have possibly received aid from foreign countries to maintain themselves and their Hezbullah entity. So it is only fair for the privileged elite (these has-been warlords, yes) to receive foreign aid as well, but only until they can eliminate the domestic threat: the common people. In Lebanon we have the perfection of secular democracy: many parties, many leaders, no people.

chrisrushlau.....Your name is foreign and so is your ideology .... there is nothing Lebanese about you.

Hollande can't even control his girlfriend who is badmouthing his previous girlfriend all over twitter, now he wants to give lebanon moral advice? He should stick to having affairs and leave Suleiman to handle the situation in his own way, the Lebanese way!