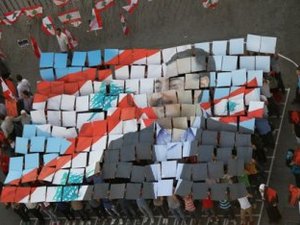 Dozens of protesters from the youth organizations of the March 14 forces on Sunday staged a sit-in outside the Grand Serail at the Riad al-Solh square in downtown Beirut, demanding the departure of the government and stressing that they will press on with their “confrontation.”

In a symbolic gesture, demonstrators assembled a giant-sized puzzle with the flag of the Independence Uprising on one side and the picture of slain Intelligence Bureau chief Maj. Gen. Wissam al-Hasan on the other.

“The mask of this government has fallen off because it is the graveyard of security, stability, the new wage scale and even the self-dissociation policy it had claimed to endorse," said MP Marwan Hamade in a speech at the sit-in.

The lawmaker said he was confident that people “will occupy the Grand Serail through next spring's elections in a democratic way.”

Hamade noted that French President Francois Hollande, who visited Lebanon earlier on Sunday, had limited his meetings to the talks he held with President Michel Suleiman at the Baabda palace, “dissociating himself from meeting the heads of other state institutions.”

The lawmaker also stressed that March 14 will not accept a national unity government, because “you can't have national unity with those who are killing their partners in the country.”

Meanwhile, MP Michel Pharaon stressed from the site of the protest that March 14 rejects to “surrender the country to a camp that does not respect Lebanon's sovereignty and freedom or the principles upon which the country was built.”

The March 14 forces on Tuesday declared a “total boycott” of Prime Minister Najib Miqati's government, calling for a “neutral, salvation government that endorses the Baabda Declaration as its ministerial Policy Statement.”

Al-Hasan was killed on October 19 in a car bomb attack in the Beirut district of Ashrafiyeh.

The powerful explosion rocked a street adjacent to Sassine Square in Ashrafiyeh, leaving two other people dead and more than 100 wounded, in the first such attack in the Lebanese capital since 2008.

Al-Hasan was close to former Prime Minister Saad Hariri and hostile to the regime in Syria. He had been tipped to take over as ISF head at the end of this year.

The Intelligence Bureau played a central role in the arrest in August of former minister Samaha, who has close links to Damascus and was charged with planning attacks in Lebanon and transporting explosives in collaboration with Syrian security chief Maj. Gen. Ali Mamlouk.

Dozens that's it? Where are all the supporters? Busy smoking hookah?

March 14, how talented you are, my compatriots! Holding 150 pieces of a puzzle and organizing yourselves in such a complicated way so that it displays the completed photo of the great Wissam al-Hassan! You never cease to amaze me. Can you please do everybody a humongous favor, my warriors? Can you possibly hold as many sheets as assassinations that Wissam al-Hassan was able to solve in his 7 or so years? Now that would be a an achievement of both you and the great rarity Wissam! Please don't let us wait much longer. OK, warriors? Thank you and God bless!

Some of you guys here making comments sounding Happy that an ISF security head was assassinated ...Interesting... will wait and see what the elections will say, who knows you guys want assassinations to be the Norm in this country then so be it if YOU win. You want pluralistic respect than you will LOSE ... what ever we vote for as Lebanese we shall reap its rewards...

Francois Hajj as far as I'm concerned is equall to Wissam Al Hassan you twit. They both defended the security of this country but its Hizbslah and Shitan Iran and Assad killing you security people ... God your stupid...

FT... you just wasted 2 minutes of my life typing a response to you... Can you pack up and go home please.

FT Hassan and Francois are loss to all of us and so do every single Lebanse we have lost in the last 30 years, the1phoenix great comment dude ..