Berri: Endeavors to Solve the Lebanese Crisis are Still Blocked 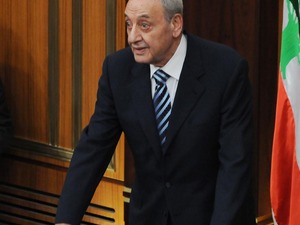 Speaker Nabih Berri reiterated on Tuesday the necessity to hold dialogue among political powers away from external alliances, and stressed that “efforts to solve the (country's) crisis are still blocked.”

In an interview with the al-Akhbar daily, Berri encouraged Lebanese factions to solve their own problems, criticizing the opposition March 14 alliance for boycotting the cabinet activities.

He noted that March 14 is adamant not to have dialogue with the cabinet, parliament or President Michel Suleiman, pointing out that it acquired all the “flaws” of the March 8 camp and added to it its own “dreadful behavior,” by adopting this stance.

“The endeavors to solve the Lebanese crisis are still blocked,” said Berri.

March 14 decided to boycott parliamentary activities until the cabinet resigns. The decision came following the assassination of Internal Security Forces Intelligence bureau chief Wissam al-Hasan, which the alliance blamed on Syria and accused the government of covering.

Hasan was assassinated in a massive car bomb in Ashrafiyeh that left two others dead and more than 100 wounded.

“History is repeating itself,” said Berri alluding to the demand of March 14 to topple the cabinet, a stance replicating that of March 8 in 2006 when the latter was in opposition to the cabinet of then PM Fouad Saniora.

Berri noted that Sunday's visit of French President Francois Hollande to Lebanon had the single goal to “support dialogue.”

“Lebanon has the opportunity to prove to the world that it can solve its own problems. The whole world encourages us to hold dialogue and solve our own internal difficulties,” Berri said, adding “all countries want stability for Lebanon and encourage dialogue. The current crisis is internal par excellence.”

On “quinary” efforts to solve the crisis with PM Najib Miqati, al-Mustaqbal movement head Saad Hariri, MP Walid Jumblat and Hizbullah, Berri assured “I am against solutions based on bilateral, tripartite or quadruple alliances. We have tried these before and have proven useless. Even more, such kind of alliances have doomed Lebanon.”