Miqati: The Economy Should Not be Exploited for Political Gains 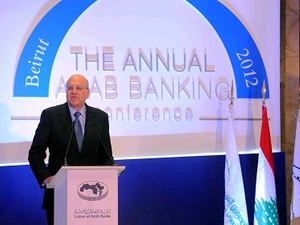 Prime Minister Najib Miqati stressed in a statement he delivered at the Annual Arab Banking Conference on Friday that the economy should not be exploited to achieve political gains.

In his statement the PM stressed that Lebanon has achieved a slight growth rate despite the changes fanning out in the Arab world.

“Although Lebanon was influenced negatively by the political, security and economic situation in the Arab region and the world, it was the least vulnerable to the effects of the global financial crisis. Its banking sector maintained resilience and immunity,” said Miqati.

The cabinet is seeking to study ways to achieve the social-economic reform in a bid to strengthen the economic framework, help the private sector, rehabilitate the infrastructure, develop education, health care and social health. It also aims to support regional and municipal development, added Miqati.

The cabinet seeks to activate and unify the vision about the role of the private sector, and to issue a law of partnership between the public and private sectors.

In light of the regional and global economic situation prevailing, Miqati stressed that efforts to thwart obstacles facing the national economy are one of the cabinet's goals, including tourism and exports.

The cabinet is in efforts to improve the electricity sector by increasing the production capacity, and invest the region's economic resources.

In the telecommunications sector, “we are in the process of setting up a mechanism to draw a clear policy for communications and information technology based on Law No. 431,” said the PM.

Elaborating on Lebanon's banking sector, he said it was able to maintain its immunity and role increasing total deposits in Lebanese commercial banks, an average of seven percent annually. At the same time claims on the private sector grew at an annual rate of approximately ten percent.

All the above confirms the distinguished role of the Lebanese banks in the financial sector in the Arab region, said the premier.

Miqati concluded addressing all political powers in Lebanon that the government will not succumb to the first crisis it faces.

“We should not exploit the economy for political purposes. The economic sector should be given the priority. We reject using the economy to achieve political gains,” he said.

Hopefully Hariri and Geagea are listening ... their antics are the main stumbling block in the way of Lebanon moving forward ...

mmckinl, are for real??? The cabinet is made up of M8 idiots !!! they are fighting among themselves (Berri against Aoun, Nahhas quit, PSP against PFM, Safadi against Miquati, Fneish covering his brother's deals with expired medications and the list goes on and on etc..) are you too blind to see that??? or are you just like the rest of the M8rs "SELECTIVELY BLIND"?

hizbushaitan is the worst disaster that fell on the Lebanese people and as long as they control our government (Vichy like government) we are not a free country.
everything done to curb this Iranian invasion is welcome.

The entire world's economy is heading lower and you would sacrifice the well being of Lebanon today for measures you could easily take in next years elections.

geha, if you don't like the cabinet, don't vote for it in the next elections. Let elections decide who gets to be in power.

"Miqati stressed that efforts to thwart obstacles facing the national economy are one of the cabinet's goals, including tourism and exports."

all is blabla to make believe they are working... the real measures will not be taken as lots of ministers will not vote laws against their own business interests!
the first obstacle is to remove all the financial privileges of the army police ministers and MPs. second is to reform the administration and equip it with computers to stop corruption at all levels= it been a promise since lahoud s era! nothing done so far...
third forbid a minister to practise if there is a conflict of interets between his business and his portfolio like the majority of ministers have and esp mikati and his own telecom businesses and others!

so all he says is just not credible as no minister nor MP will vote against their own interests...

Of course there is much to what you say but do not believe this is just a Lebanese problem. Corruption is rampant these days. War crimes, crimes against humanity, ongoing bank fraud and as you say corrupt politicians.

These problems must be addressed and the best tine to address them is when the people are fed up with government from all sides. Until people from all parties come together and protest this will not happen.

yes mmckinl, people should show how fed up they are with all those tribal leaders just fighting for their own bank accounts!
but there are too many sheep in lebanon that follow a leader without even thinking, just out of blind stupidity...so i guess people have the country they deserve.
lebanon needs a cultural revolution first to change its religious and tribal mind then politicians will start to fear them and serve them as they should!

Tourism is our biggest sector but we can't rely only on this industry. There's an economical crises in Europe and the Us economy is not doing well. People abroad don't have much to money to pay for tourism. The instability by HA is also an other factor. But let's think about it the tourism season is 3 months a year. What do we do during the 9 others? A real government would propose infrastructure programs, technology investments and subsidies to help start businesses. Of course M8 and M14 are too busy fighting each other that none of this will happen as long as those 2 are around.

independant. You have a point. We should stop seeing tourism as this big valve for growth. We should rely on Diaspora tourism. We shouldnt depend so much on arab tourism. Last time in the airport, a saudi was waiting in line and commenting on how much he would need to pay the immigration officer to go quicker. We dont need to sell our lands and to be such big suckers for arab tourism.
Lebanon is a nice place to live. We should have good communications links and airline connections so that lebanese can run businesses abroad while living in lebanon. There are a lot of people living in florida and working all over the US, or living in monaco and working elsewhere in europe. Lebanon's vocation is to be a "place to live", for fortunate lebanese who can do so, and for lebanese retirees.

I am not interested to go to qatar and beg them to come back to lebanon to have sex with ukranian girls here. That is not our vision of a country.

to do that, we should make the diaspora welcome, and at least give them the right to vote as Lebanese.

Here's thought. Stop complaining on what is being "exploited" for politcal gains and tell us the accomplishments of this government. Why don't you try using your "accomplishments" or lack there of for political gain. We are all ears!

hey lebanonfirst... do u mind changing your name? :-) it will get confusing otherwize

Before one asks others to change, one must look within himself for change. or you can just put up an avitar. i've had this name for a while and really like it as it reflects how i feel. not changing it my freind.

well i did consider changing mine. But that wouldnt help you: I have had it for more time than you, and hence I have my own network of friends and enemies on this forum. If you keep the name, you will end up having to deal with people thinking of dealing with me!!
Let us do a deal. Give me the link to the oldest post you put, and if my oldest post is earlier, you drop the name. Else, I drop it. Deal?

deal. once Naharnet's search tool starts working I will post it.

Lebanon will never go forward as long as there are Militias and Arms outside the Government. Just Forget It. Nobody will put a penny in unstable country.... Similar to anybody investing in unstable company.

This is the Facts.. Believe it or Not... Now Poor will get poorer and rich will get richer... already happening.

@lebanon_first and lebanonfirst, you guys are okay in my book, our politicians should learn from you how to compromise civilly ..cheers :)