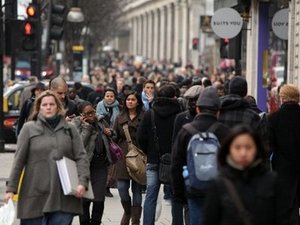 The British economy turned in surprisingly robust official growth of 0.8 percent in the third quarter on Tuesday, soothing fears of a double-dip recession a week after dramatic public spending cuts.

And on a 12-month comparison, growth was 2.8 percent, the Office for National Statistics said, the strongest 12-month reading since 2007.

The quarterly figure, which was double market expectations, was largely the result of major gains in services, construction and production.

The picture of robust activity comes one week after Britain unleashed the biggest public spending cuts for decades. Some analysts have warned that the massive austerity drive could push the country back into recession.

"Construction output surged by 4.0-percent quarter-on-quarter and 11.0 percent year-on-year as it extended the surge in activity seen in the second quarter."

In reaction, the pound rallied on expectations that it would dissuade the Bank of England (BoE) from pumping more money into the economy via its radical bond-purchasing programme any time soon.

The currency was given a further boost after Standard & Poor's credit rating agency said on Tuesday that last week's radical state spending cuts had improved the outlook for the economy.

The ratings agency held the top AAA credit assessment for Britain and upgraded its outlook to stable from negative.

In response to the positive news flow, the pound jumped as to 1.5897 dollars, hitting the highest level since October 19. And it also set a similar peak at 87.76 pence against the euro.

"The unexpectedly sharp jump in UK GDP in the third quarter looks likely to delay a further bout of quantitative easing," added Loynes.

However, the July-September period marked the fourth quarter running of expansion since the recession.

Nevertheless, the data marked a significant slowdown from the 1.2-percent surge which was recorded in the second quarter -- which had been the fastest quarterly growth rate for nine years.

"The growth in the third quarter was surprisingly confident, exceeding all expectations and it will provide some welcome relief to the coalition government," said trader Mark Bolsom at currency group Travelex.

"These figures will refresh hopes that the UK will avoid the much maligned double dip -- but we are going to have to wait until 2011 to see what impact spending cuts and tax hikes will have on the pace of economic growth."(AFP)