Fabius Meets Miqati: France Will not Interfere in Lebanon's Affairs 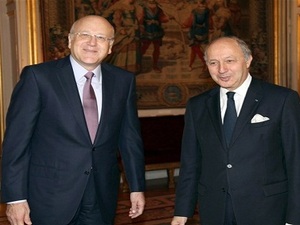 French Foreign Minister Laurent Fabius reiterated on Tuesday that France will not interfere in Lebanon's domestic affairs, but fully supports its stability.

“France does not interfere in Lebanon's internal affairs, but we fully back stability in Lebanon,” he said after holding talks with Prime Minister Najib Miqati at the French Foreign Ministry in Quai d'Orsay in Paris.

“We encourage you to return to dialogue and back the policy of dissociation adopted by your government in order to evade Lebanon the regional repercussions,” he told the premier.

On his part, Miqati stressed that Lebanon will adhere the policy of dissociation to spare Lebanon the repercussions of the Syrian crisis.

Discussions also touched on the Israeli aggression on Gaza and the endeavors exerted in that regard to reach a ceasefire.

The French are extremely unlucky to be lead by Jews. Sarkozy, Hollande, Fabius, Copé just to name a few. Why? Because they form a mafia that won't incriminate other jews. Otherwise, their religion isn't an issue.

They'll always be Israel's friend before Lebanon. Still good but not the "best".