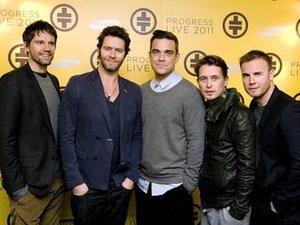 Take That will perform with its original line-up for the first time in 16 years, the boyband confirmed on Tuesday as they revealed plans for their inaugural tour since Robbie Williams rejoined.

The British five-piece will play four nights at the City of Manchester Stadium in the group's hometown in June before four mammoth shows at London's Wembley Stadium.

Band member Gary Barlow promised fans a big show, but was keen not to reveal too much.

"We've got a little bit of a theme but we're not going to give that away now," he said.

"It will be a big production show. We're looking forward to coming up with big ideas for it to be a spectacular again."

In the British Isles, Sunderland, Birmingham, Cardiff, Dublin and Glasgow will all play host to the reformed band before they head off to Europe.

The stars will play Amsterdam, Copenhagen, Hamburg, Dusseldorf and Munich, as well as appearing at Milan's famous San Siro stadium.

The group disbanded in 1996 after six years together, but reunited in 2005 to huge success in terms of record sales and concert tours.

Their last tour, "Circus Live" in 2009, became the fastest-selling of all time in Britain.

Williams, who acrimoniously left the band in 1995 to embark on a hugely successful solo career, rejoined in July of this year after patching up his differences with chief songwriter Barlow.

"I'm really looking forward to it," the singer said.

"When I left I didn't think I would ever say I'm really looking forward to dancing and rehearsing.

"The first time around there was a lot of power struggles with everybody. This time there just isn't."(AFP)