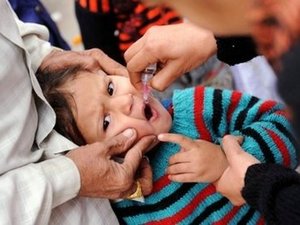 A new polio vaccine offers superior immunization and is raising hopes of a total eradication of the disease, according to a study published on Tuesday by British medical journal The Lancet.

There are three types of the polio virus, and while type 2 has been almost entirely eradicated since mass vaccinations began in 1988, types 1 and 3 remain a global health threat.

The new bivalent vaccine targets types 1 and 3, and was shown to be significantly more effective than the common trivalent vaccine in a 2008 trial in India.

In the trial, conducted by experts from the World Health Organization and India, 830 new-born babies at three medical centers were give either existing vaccines or the new bivalent vaccine.

The new vaccine is already being widely used in India, and the number of polio cases was down to 32 so far this year, from 260 last year, the journal said, quoting researchers Nigel Crawford and Jim Buttery from the Murdoch Children's Research Institute in Melbourne, Australia.

The researchers warned that progress in polio immunization was being undermined by a lack of funds, and called for a "final, concerted effort" to stamp it out.(AFP)