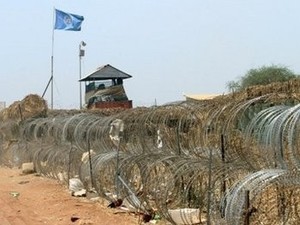 North and south Sudan have agreed to start withdrawing unauthorized troops from the flashpoint Abyei border region, the United Nations said, a week after clashes there left 14 people dead.

The two sides agreed that the pullout would begin from Tuesday and be completed within a week, the U.N. Mission in Sudan (UNMIS) said in a statement late on Sunday.

The decision was taken at a meeting of a joint committee, comprising representatives of the north and the south and chaired by UNMIS Force Commander Major General Moses Obi, the statement said.

"The meeting agreed that both parties will create a conducive environment by de-escalating tensions and speaking to their respective communities on the ground regarding the implementation of the Kadugli agreements, and ensuring freedom of access for UNMIS," the peacekeeping mission added.

A peace accord signed by the two sides in the South Kordofan state capital Kadugli in January called on all forces to withdraw from the bitterly disputed region except the special Joint Integrated Units (JIUs) of northern and southern personnel, both army and police, alongside U.N. peacekeepers.

The United Nations and Western observers say the two armies have been reinforcing their positions in and around Abyei in recent months.

The JIUs will stay in the area, charged with ensuring its security.

It is not the first time that Khartoum and Juba have committed to implementing the Kadugli agreements, and the International Crisis Group sounded a note of warning shortly after the U.N. announcement, saying the Abyei conflict was reaching a tipping point.

Escalating tensions on the ground and between the leaders in Khartoum and Juba, who have both made unilateral claims over Abyei endangered Sudan's fragile peace and the smooth secession of the south, the Brussels-based think tank said.

Abyei's future status is the most sensitive of a raft of issues that north and south Sudan are struggling to reach agreement on ahead of the south's full independence, due to take place in exactly two months time.

Deadly fighting and recriminations have flared since January, when the region had been due to vote on whether to join the north or the south, alongside a referendum in the south that delivered a landslide for secession.

But the plebiscite was postponed indefinitely amid deadlock between north and south over who should be eligible to vote.