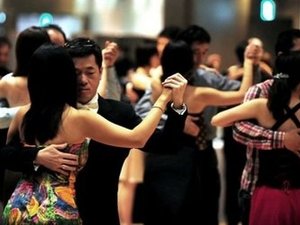 Dancers from Hong Kong, Australia, Japan, Singapore, Taiwan, China, Canada and Argentina got into the swing with scores of Koreans for the Seoul Tango Festival from May 5-9.

"I didn't know so many dancers would come from so many places...it's surprising to see such a huge tango festival here in Korea," said businesswoman Lee Chae-Won, 27, who has just begun learning the dance.

But she is already under the sway of the tango and understands the attraction.

"I think there's some sort of emotional interaction with the partner, and it soothes my heart when I dance the tango," she said.

"It's the indescribable interaction with the partner," said another local dancer, Ma Sang-Heun, 31, a Seoul elementary school teacher. "It feels as if I am whispering secret words."

Tango took off in South Korea only about a decade ago but has grown rapidly in popularity, expanding from Seoul to other cities including Daegu and Busan which have studios dedicated to the dance.

About 300 dancers, including 120 foreigners, took part in this year's Seoul festival.

"A lot of Koreans have gone to Argentina to learn tango, and I think Koreans and tango go well together...with the passion, and all," said high school teacher Park So-Young, 39.

"So in the future, the number of dancers will increase. My husband recently went to Argentina for a business trip and bought me tango shoes as a present." The festival was staged at a number of milongas -- specialist venues for the dance -- in southern Seoul.

Daniel Liu, 39, formerly an engineer and now a professional tango dancer in Taiwan, was one of many who visited Korea for the festival. Enthusiasts increasingly travel to cities overseas for a kind of tango vacation, he said.

"In Europe it's like every weekend there's a festival someplace, and in Asia it's becoming something like that," he told Agence France Presse.

Koreans who fall in love with the dramatic dance join clubs to learn and practice, then visit local milongas both to dance and to network with others.

"I used to go to milongas up to three to four times a week, and now I just dance whenever time allows," said Han Jeong-Su, 38, also a teacher, who has danced for more than six years.

Six invited Argentinian performers stole the show at the festival, with their stage demonstration winning prolonged applause and whistles of appreciation.

Many South Korean enthusiasts share a common desire -- to visit Argentina one day and experience the dance in its home.

"Going to Argentina to tango? That is my dream," said Park.