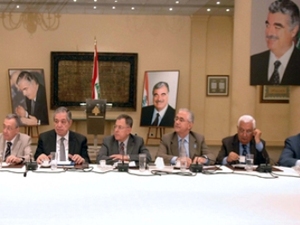 The Mustaqbal parliamentary bloc on Tuesday responded to "the campaign targeting everything related to the work of the premiership and the finance ministry," noting that "every revision with the aim of correction is a welcome thing."

In a statement issued after its weekly meeting in Qureitem under ex-PM Fouad Saniora, the bloc noted that "the parties leading the campaign" against ex-PM Rafik Hariri "are the ones who were behind … the destruction of state institutions in the past."

The Mustaqbal bloc added that the so-called campaign also aims to "distort the objectives of the Special Tribunal for Lebanon."

On the other hand, the bloc noted that Lebanon and Syria must join efforts in order to strengthen their bilateral ties "regardless of some remarks circulated in the media."