With Eye on Investment, Emir of Qatar Begins Britain Visit 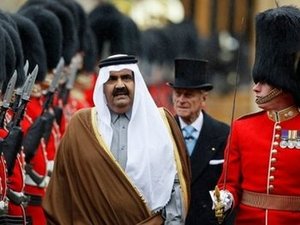 Queen Elizabeth II formally welcomed the emir of Qatar to Britain on Tuesday for a trip aimed at boosting growing trade links and both countries' bids for the football World Cup.

Sheikh Hamad bin Khalifa al-Thani shook hands with the British monarch upon their meeting in Windsor, west of London, as the military sounded a gun salute.

The pair then traveled to Windsor Castle by horse-drawn carriage as the 58-year-old emir officially kicked off his three-day state visit amid regal splendor.

The emir will hold talks with Prime Minister David Cameron later Tuesday after visiting the British parliament. Queen Elizabeth will host a state banquet in his honor at the castle.

On Wednesday, the emir is to visit the stadium for the 2012 London Olympics and, with Qatar bidding to host the 2022 football World Cup, he will hold discussions with officials on England's bid to host the 2018 World Cup.

The emir, who is accompanied by Sheikha Mozah, one of his three wives, was dressed in traditional Arab clothing but remained unmoved by the driving rain and chilly temperatures.

The 1st Battalion Grenadier Guards provided the guard of honor as the emir and the queen's husband Prince Philip inspected the troops.

Following the main party were the heir to the throne Prince Charles and his wife Camilla, the Duchess of Cornwall.

The prince recently courted controversy when it was revealed that he had lobbied the emir to change a major London building development plan, sparking accusations of abuse of power.

The oil- and gas-rich Gulf emirate has a growing influence in Britain, having acquired the landmark Harrods department store in London in May for a reported 1.5 billion pounds (2.4 billion dollars, 1.7 billion euros).

Qatar also has a 6.8 percent stake in British banking giant Barclays and a 25.9 percent share in the Sainsbury's supermarket chain.

The emir said ahead of the visit he was interested in investing in Christie's auction house in a tie-up linked to Qatar's new museum of Islamic art.

"We are building a museum and it (Christie's) has links with the stuff we are collecting for our museum," he told the Financial Times newspaper.

"It depends on the opportunity -- if we had a good opportunity we would not hesitate."(AFP)