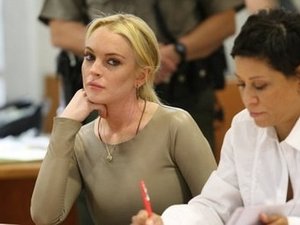 Troubled American starlet Lindsay Lohan pleaded no contest Wednesday to stealing a $2,500 necklace, in a deal expected to allow her to serve a jail term at home.

The 24-year-old was sentenced last month to 120 days in jail for violating probation and ordered to complete community service at the Los Angeles County morgue and a women's center.

She was not in court Wednesday as her lawyer Shawn Holley entered a no contest plea on the theft charge, effectively meaning she accepts it as part of an agreement to avoid actually going to jail.

Lohan must surrender to jail authorities on or before June 17. She was also ordered to do 480 hours of community service last month, including 100 at the LA County morgue.

Los Angeles Superior Court Judge Stephanie Sautner said if Lohan is approved for home detention, as expected, she would not be able to leave home during the day to do her community service.

"House arrest is supposed to be in lieu of jail," said the judge.

Lohan must also stay at least 100 yards away from the jewelry store where the alleged theft took place, near her home in the upmarket Venice district, to undergo psychological counseling and to complete a course for shoplifters.

Lohan spent a few hours in jail last month after Sautner ruled she had violated her probation for a 2007 drug and drunk driving offense when she allegedly stole the necklace on January 22.

She was released on $75,000 bail after spending less than five hours behind bars.

It is the latest in a long list of legal tangles for the star -- once the promising child star of hit Disney movies "The Parent Trap" and "Freaky Friday" -- who has a reputation for hard partying.

In July last year Lohan was sentenced to 90 days in jail and another 90 days in rehab for violating her probation in a drunk-driving case, but served just 13 days due to prison overcrowding.

She was jailed again in September, but was granted bail after only 15 hours behind bars and subsequently checked into rehab for drug addiction, a course she completed in January.

In 2007, she spent just 84 minutes in jail after police arrested her twice for cocaine possession while driving -- in one instance crashing her Mercedes-Benz into a tree.