For Smartphones, What's Too Big or Small? 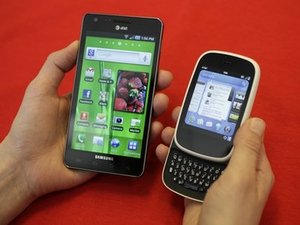 With scores of smartphones available, one obvious way for them to stand out is with size. Two new phones take that to extremes: HP's tiny Veer 4G and Samsung's massive Infuse 4G.

Both have the foundations of good smartphones, including great operating software and the ability to run on AT&T's high-speed "4G" network. But their sizes present some major weaknesses, too.

Spending some time testing these phones made it clear that size does matter. Picking a phone that's too large or too small can make the experience dismal.

I started on the smaller end of the spectrum with the pint-sized Veer, which comes in black or white and is cuter than a cache of cat videos on YouTube.

Styled like a mini version of its bigger sibling, the Pre, the Veer is about the size of a stack of credit cards with a bright 2.6-inch screen on top. The screen slides up to reveal a small keyboard. Its battery is rated for a not-so-generous maximum of five hours of talk time, and it includes 8 gigabytes of storage. It costs $99 with a two-year service contract with AT&T.

The Veer is so tiny that it doesn't even have a built-in headphone jack, a standard smartphone feature that must have seemed too big to cram into its little package.

Instead, its magnetic charging port doubles as a connector for a headphone adapter, which is included. I kept worrying that I'd lose the adapter — until I realized I could just stick it on the fridge.

The Veer uses the webOS operating software, which was developed by Palm before Hewlett-Packard Co. bought it last year. The webOS is clean, intuitive and smartly designed. You can see open applications as little "cards" that you can slide across the screen, tap to enlarge or flick to dismiss. There's also a search feature for quickly searching data stored on the phone and on the Internet.

The Veer's tiny screen, however, made my hands feel enormous, which they aren't for someone who is barely 5'3". I also felt clumsy holding the phone, especially with the keyboard closed, as it felt too small for my hand. Like a slippery bar of soap, it almost flew out of my hands several times as I tried to slide open the keyboard. Calls sounded OK, but it was weird holding such a tiny nugget of a phone up to my ear.

The phone includes access to HP's App Catalog, which has Foursquare, Facebook and some other popular apps you'd find on the iPhone or a phone running Google Inc.'s Android software. There are only about 6,000 apps in all, though, so the selection is much slimmer than iPhone's or Android's. You won't find an app for eBay or the "Words With Friends" game here.

The Veer seems most well-suited for "snacking." You'll be fine looking up a restaurant, checking email, updating Twitter or any other simple task.

But trying to use it extensively for a single task is difficult and not worth the trouble. Although Web pages looked sharp on the screen and videos streamed well over AT&T's "4G" network, I didn't really want to read full news articles or watch clips on such an itty-bitty screen. My fingers felt cramped on the tiny keyboard, so I didn't have the patience to send extensive messages.

While the Veer is too small, in some ways the Infuse is too big. This Frankenphone has a brilliant 4.5-inch display, more massive than nearly every other smartphone on the market. It made a great media player, but it felt awkward to make calls on since it is so wide and tall.

Typing on its large virtual keyboard was often error-free, though sometimes uncomfortable because the phone felt so large in my hands.

It's not big all over: The phone is a bit thicker than an iPhone, which seems pretty thin given its enormous display. And it's fairly light, too, at 4.9 ounces, which is just a fraction of an ounce bigger than Apple's device.

The phone is fast. It opened apps quickly and responded well to my taps on the screen. Over AT&T's 4G network, it was fine at streaming videos and loading webpages. The Infuse is rated for up to eight hours of talk time, so there should be plenty of juice for checking emails, updating Facebook and making calls (which sounded decent).

It's probably best at playing videos, which I really enjoyed doing on the Infuse because its screen is so sharp and big. More so than many smartphones, the display seems appropriate for watching TV episodes or even full-length films (which you can rent or buy from the built-in Samsung Media Hub).

One cool perk: It includes an HDMI adapter, which fits into its charging port so you can connect the phone to your high-definition TV with an HDMI cable and watch videos on the larger screen. The adapter also has a charging port on it, so you can charge your phone simultaneously.

The Infuse's 8-megapixel camera is good, though I sometimes had trouble focusing it. It had a bright flash and a number of adjustable settings. You can always add a camera app from the Android Market if you want more options such as color filters. There's also a much lower-resolution camera on the front for taking photos or videos.

The Infuse has 16 GB of internal memory and 2 GB more on a microSD card. It costs $200 with a two-year AT&T contract. The phone runs version 2.2 of Google Inc.'s Android software, which is available on plenty of other devices but isn't the latest version for smartphones.

I'm a fan of compact electronics, and I'm a sucker for a big, bright touch screen. But these phones both felt too extreme for me.

When it comes to smartphone sizes, I'll stick with a medium for now, though.