U.N. Lauds 'Sacrifices' Made by Lebanese in Helping Syrian Refugees 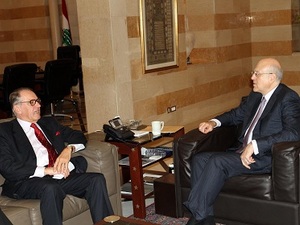 U.N. Deputy Secretary General Jan Eliasson hailed on Tuesday the “sacrifices” made by the Lebanese people in assisting Syrian refugees who have escaped the fighting in their country.

Following talks with Prime Minister Najib Miqati at the Grand Serail, Eliasson said the Lebanese people are making “huge sacrifices” and the U.N. appreciates and respects the efforts to deal with the situation of the displaced Syrians.

The diplomat said it was important to preserve stability in Lebanon, adding the U.N. was closely following up the developments in the country.

According to figures released by the United Nations High Commissioner for Refugees on Saturday, there are around 109,000 refugees formally registered within the agency and 41,000 others currently contacting it to be registered.

Last week, the government completed its strategy for helping the displaced Syrians after officials met with UNHCR representatives and agreed to a national response plan to help refugees at a cost of $178 million.

Following his talks with Miqati, the U.N. diplomat also lauded the role of the Lebanese Army mainly in imposing security in the northern city of Tripoli following a week of deadly clashes between rival neighborhoods.

He emphasized the need for continued coordinated operations with the Lebanese army, saying: “Cooperation between the army and UNIFIL is critical for the successful implementation of U.N. Security Council resolution 1701.”

“The continued support and assistance of the international community to the army is therefore vital,” he added.

NO favour to our hizbocrap government, the people are the ones that helped them.

Siddo schizo Farsi BSThrower....what do you know about Lebanon? Stick to your Persian politics and stay out of our country you and your cons HA!