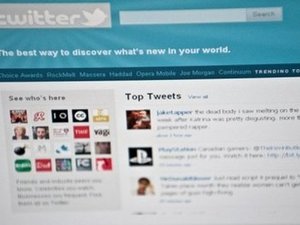 Startup WhoSay has been working quietly in the background helping Hollywood stars keep control of pictures and videos at social networking sensations Twitter and Facebook.

The invitation-only service caters to celebrities whose mere choice of shoes can spark fashion trends or casual meals out could turn unknown restaurants into hip dining spots.

WhoSay's goal is to let famous folks use Twitter or Facebook to share private moments with fans without having posts such as digital photos used to endorse products or promote Web pages without permission.

"We have a very simple objective and we work with a specific subset of the world: celebrity influence," WhoSay chief executive Steve Ellis told Agence France Presse.

WhoSay provides software applications that its clients can put on their smartphones so that photos or videos fired off for Twitter or Facebook posts don't escape into the wild of the Internet.

Third-party applications such as TwitPic and Plixi that are commonly used to host pictures Twitter users post in the form of links connected to written comments.

For celebrities using Twitter that means a candid photo sent out in a "tweet" could end up being used to promote sales of something they happened to be wearing or lure traffic to websites packed with money-making ads.

Image-handling intermediaries have sold tweeted pictures, with customers reported to include paparazzi.

"There are a lot of people profiting off of celebrities on the Internet in terms of Twitter," said Ann Gurrola, a Marleah Leslie & Associates publicist whose clients include celebrities and high-profile executives.

"They are making all this money and your client is getting nothing," she continued. "With WhoSay, you get control."

WhoSay provides clients with smartphone applications that host images or videos for Twitter or Facebook posts as copyrighted material on secure computers where fans can enjoy them.

WhoSay is designed to keep publicists in tune with what celebrities are posting to Twitter or Facebook and even let assistants tend to accounts.

"We think that them being connected to fans is important, but we want to give them the control they should have over their content," Ellis said.

"They could share an image from their phone, but in a way that mattered to them."

Two of Gurrola's clients use WhoSay and she hopes to get more of them signed on to the service.

"There is no down side; there is only an upside," Gurrola said of WhoSay. "I think what they are doing is brilliant."

CAA has a minority stake in WhoSay, which listed athletes, actors, and musicians among its hundreds of clients. Online retail titan Amazon was listed as an investor in the startup.

The small WhoSay team is divided between Los Angeles, New York, and London, according to Ellis.

"The onus is not on policing," he continued. "The onus is on sharing in this new-fashioned way where our clients get the benefit of the traffic and connection to their fans."

WhoSay does not charge for its service. The startup was optimistic that it might one day share money high-profile clients could make from heavily-visited pages hosted by WhoSay.

"Our clients can provide a unique perspective on themselves and their work," Ellis said. "They can provide the perspective from inside the limo on the way to an event, and what they see through their eyes."