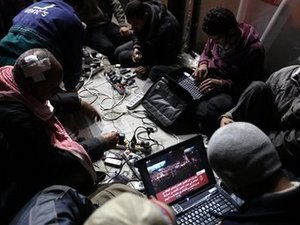 Dictators in the Arab world could crush uprisings against their iron-fisted rule using the same social media that have been credited with boosting the revolts, Amnesty warned in a new report Friday.

In its annual analysis of the world's human rights, Amnesty International praised the role of websites such as Twitter and Facebook in fomenting the biggest revolt against repressive regimes since the end of the Cold War.

But the rights group cautioned that social networking sites which had helped cyber-activists outmaneuver the authorities in successful uprisings in Tunisia and Egypt were a double-edged sword.

"There is no question that social media played a very important role in allowing people to get together," Amnesty International Secretary General Salil Shetty told Agence France Presse.

"There is no doubt that there is a massive opening up of space through the Internet -- but we have to remember all the time that this also gives an opportunity for governments to crack down on people."

Amnesty stressed in the report that "governments are scrambling to regain the initiative or to use this technology against activists."

The Arab Spring, as the wave of revolts has become known, started with a popular uprising in Tunisia that ended the 23-year-rule of president Zine el Abidine Ben Ali in January.

This "Jasmine revolution" inspired an uprising in Egypt that put an end to Hosni Mubarak's 30-year presidency and revolts have since spread across North Africa and the Middle East.

But Shetty warned there was a "serious fightback from the forces of repression" in countries where revolts had started but as yet failed to oust repressive rulers, such as Libya and Syria.

In Libya, where rebels have met with stiff resistance in their fight to overthrow leader Moammer Gadhafi, the regime had been "very systematically using the Internet and quite sophisticated social media stuff to repress people," he said.

Amnesty also warned that companies which provide Internet and mobile phone services risked becoming accomplices of oppressive regimes if they interfered with access or spied on activists at the request of regimes.

"They must not become the pawns or accomplices of repressive governments who want to stifle expression and spy on their people," said the group, which is this year celebrating its 50th anniversary.

During the Egyptian uprising, mobile phone operator Vodafone admitted it was forced by the authorities to broadcast pro-government messages. Internet and mobile coverage was also cut at times.

But the Egyptian uprising authorities ultimately failed in their attempts to stop protesters organizing through social media and Mubarak was forced out of power in February.

The leading role of the Internet in the Egyptian revolt was highlighted by the emergence of Google executive Wael Ghonim as one of the movement's heroes after he administered the Facebook page that helped spark the uprising.

Amnesty noted that in China, where authorities routinely block sites that conflict with official viewpoints, the crackdown on Internet use had intensified in recent months amid fears that activists had been inspired by events in the Arab world.

"In an attempt to pre-empt a Middle East-style uprising, the government widened its crackdown on activists," said the rights group.

More than 100 activists, many of them active online, went missing following an Internet call in February for people to stage a "Jasmine Revolution", said Amnesty.

The rights group said the fall of dictators and ongoing uprisings against repressive regimes were a cause for optimism but cautioned that the final outcome was unclear and the Middle East was "on a knife-edge."

"What remains unclear is how it will all end," said the group.

"If the protests intensify and more rulers are swept aside, many governments around the world will be watching carefully to see which political or religious forces eventually move into the vacuum."