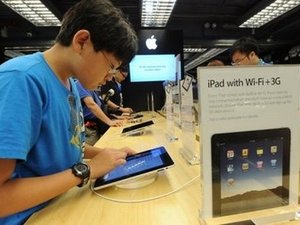 U.S. high-tech giant Apple has been accused in China of copyright infringement, with a computer screen maker saying it owns the rights to the iPad name in the country, a report said Wednesday.

Proview Technology Co., Ltd., which is based in the southern city of Shenzhen, registered the iPad trademark in January 2000 and still owns the rights to its use in China, the Beijing News said, citing government archives.

Li Su, a shareholder of Proview Technology, has demanded the California-based Apple "immediately stop its rights infringement activities" and hold fresh negotiations with the Chinese firm, according to the report.

Li threatened that the company would otherwise ask authorities to "seize relevant Apple products", it added.

The two companies held talks previously over the transfer of the trademark but had failed to reach an agreement, the report said.

Yang Rongshan, chairman of Proview Technology's parent company, said that Apple's decision to sell iPad in China was illegal and "arrogant", it said.

Spokespeople at Apple China were not immediately available to comment on the report when contacted by AFP on Wednesday.

Apple in May brought Proview Technology, its parent and affiliate companies as well as Yang to court, demanding that they be forbidden to transfer or sell the trademark to a third party, the Beijing News said.

News of the lawsuit comes as Apple launched its first online sales outlet in China and made its App Store available in simplified Chinese, with the U.S. technology giant keen to expand in the world's largest mobile market.

Apple opened two new retail shops in mainland China last month as it launched the iPhone 4. It now has two shops in Beijing and two more in Shanghai, with a total of 25 outlets expected by the end of next year.(AFP)