'Hobbit' Movies to be Made in New Zealand 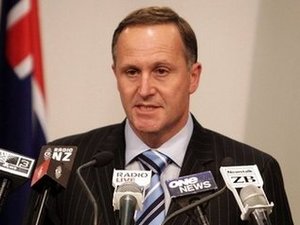 Peter Jackson's "Hobbit" movies will be made in New Zealand after the government struck a deal with Hollywood studio Warner Bros. to end months of union tensions, Prime Minister John Key said.

Key agreed to give Warner sweeteners worth tens of millions of dollars and amend industrial laws in order to retain New Zealand's coveted role as Middle Earth in Jackson's long-awaited follow-up to "The Lord of the Rings" trilogy.

In return, Warner Bros. would use its marketing clout to promote New Zealand as a tourist destination, Key said after two days of tense negotiations with studio executives.

"I am delighted we have achieved this result," Key told reporters, saying retaining the 500 million U.S. dollar production -- reportedly the most expensive film project ever -- would save thousands of jobs in New Zealand.

Producers had threatened to move the two-part prequel to "The Lord of the Rings" elsewhere after a row erupted over union representation for actors on the set.

Key described the two days of talks in his official Wellington residence that preceded the deal as "hardball" but said both sides had made concessions to reach an agreement which allows filming to begin in February.

"It's good to have the uncertainty over and have everyone full steam ahead," he said.

In an unprecedented move, Key said the New Zealand parliament would also introduce legislation Friday clarifying laws covering workers in the film industry, in a bid to ensure the project did not face further union action.

"We will be moving to ensure that New Zealand law in this area is settled to give film producers like Warner Bros. the confidence they need to produce their movies here," he said.

New Zealand will also host a premier for one of the "Hobbit" movies, similar to the Wellington unveiling of "The Return of the King", which garnered worldwide publicity.

The country's rugged scenery was a key element in "The Lord of the Rings", boosting tourism as the trilogy's critical and commercial success kick-started a local movie industry worth 2.3 billion U.S. dollars a year.

But lengthy delays on "The Hobbit" forced Mexican director Guillermo del Toro to quit the project earlier this year and Jackson had warned the industry would struggle if the movies left the country.

The dispute divided New Zealand's filmmaking community, with some saying the actors' union NZ Equity was simply trying to guarantee minimum standards for its members and others accusing it of unfairly targeting Jackson.(AFP)