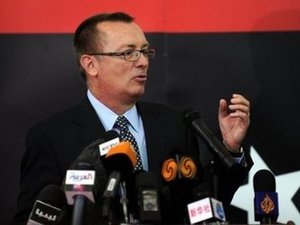 The United Nations warned Lebanon on Wednesday that the alleged Lebanese fighting in Syria's civil war put the country increasingly at risk of being dragged into the conflict.

U.N. political affairs chief Jeffrey Feltman told the Security Council there were "multiple reports" of Lebanese fighting for and against President Bashar Assad in Syria.

Lebanon's government has sought to stay out of the Syria crisis while the country is bitterly divided over the rebellion.

Twenty-one Lebanese men died in Homs province on November 30 after joining the rebellion against Assad, according to local officials and an Islamist leader. There have been several deadly clashes in the country and frequent cross-border shellings.

The conflict has also spilled over into the Golan Heights where the United Nations has about 1,000 troops monitoring a four-decade-old ceasefire between Syria and Israel.

The U.N. Security Council said Syria must stay out of the demilitarized zone as it renewed the mandate of the U.N. Disengagement Observer Force (UNDOF) for six months until June 30.

A resolution on UNDOF expressed "grave concern" at violations of the 1974 ceasefire accord including the presence of Syrian troops and tanks in the demilitarized zone.

It also highlighted "serious concern" at the presence of opposition rebels in the zone.

Five UNDOF peacekeepers were wounded last month as they were being taken to Damascus airport and multiple incidents have been reported in the Golan zone. Syrian fire

The U.N. has sent chemical weapons kits and extra armored cars to the UNDOF peacekeepers because of fears over their security, peacekeeping officials said this week.

UNDOF has troops from Austria, Croatia, India, Japan and the Philippines.

He should have mentioned the brigades of Hezz shabiha and mercenaries there beating, sniping, and killing from the very beginning

Hezz, Shabiha and Mercineries?? Where do you people get your information from.. The above terms are purely used by M14, Zionists and the West (As all three share a common goal) to create fear and propaganda against the Syrian Government. The Hezz, Shabiha & Mercenaries you speak about are the real Syrian citizens defending their homes, land and religious rights..

Jeffry must be bored, not sure what his message is about past trying to say over and over again we care about Lebanon but its much ado about nothing....

indeed you are a joke

tell us then what did syria that you qualify as "resistant" do to liberate the golan heights? NADA.... they prefer to use their military against their own people and you praise them for that!

what do u have against women, to use a woman image so degradingly? do u have issues with women? haram FT, yalla i'm loling some more at ur womanless condition (: lol