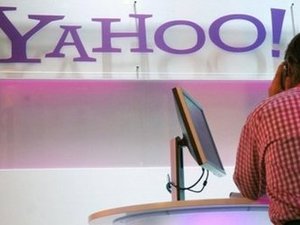 Yahoo Inc. and Chinese Internet company Alibaba Group tried to present a united front Sunday as they worked on a dispute that has caused tension in their already strained relationship.

But the two tech giants offered few details, releasing only a one-sentence statement saying they were in "productive negotiations" to resolve "outstanding issues related to Alipay," which is Alibaba's online payment service.

Yahoo, which owns a 43 percent stake in Alibaba, saw its stock tumble last week after it announced Tuesday that Alibaba had spun off Alipay. The announcement caused investors to worry that Yahoo's stake in Alibaba will become less valuable, and also brought into clearer focus the rockiness of the two companies' relationship.

Yahoo spokeswoman Dana Lengkeek declined to answer questions about who was involved in the negotiations or what Yahoo wants from them. She noted that Sunday's statement was the first issued jointly by Yahoo and Alibaba.

"Alibaba Group, and its major stockholders, Yahoo! Inc. and Softbank Corporation, are engaged in and committed to productive negotiations to resolve the outstanding issues related to Alipay in a manner that serves the interests of all shareholders as soon as possible," the statement said, in its entirety.

It echoed an equally vague statement from Tuesday, when Yahoo said it was engaged with Alibaba and Softbank in "ongoing discussions regarding the terms of the restructuring and the appropriate commercial arrangements related to" Alipay.

Representatives for Alibaba and Softbank, a Japanese firm that is also a longtime investor in Alibaba, didn't return messages for comment on Sunday.

Yahoo and Alibaba also disagree over when Yahoo was informed of the spinoff, which transfers ownership of Alipay to another company owned by Alibaba Group's CEO, Jack Ma. Yahoo says the transfer occurred last August, but that it wasn't notified until March 31. Alibaba says Yahoo's board was informed of the ownership change during a July 2009 meeting.

In Tuesday's regulatory filing, Yahoo said Alibaba had spun off Alipay so it could more quickly obtain "an essential regulatory license."

Ma has become more antagonistic since Carol Bartz, a brash Silicon Valley veteran, became Yahoo's CEO in January 2009. With Alipay under his control, analysts believe Ma could have more negotiating power if Yahoo tries to sell its stake in.

Alibaba is one of China's most powerful Internet companies, and its success has helped bolster Yahoo as the Sunnyvale, Calif., company has struggled to keep up with Google Inc.

The six-year investment has also been a way for Yahoo to keep a toehold in fast-growing China after it and other companies, including Google, have had a hard time growing their own businesses in the heavily regulated and politicized country.