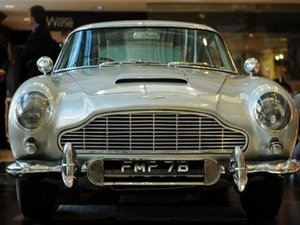 For the discerning driver, it's got an ejector seat, machine guns and a world-class pedigree. Problem is, it's going to cost a truckload of dough.

One of the world's most famous James Bond cars - the specially equipped Aston Martin first driven by Sean Connery in "Goldfinger" - will be auctioned off in London on Wednesday evening, and it's likely to fetch one of the highest prices ever paid for an automobile.

The unique car, which also has rotating license plates and other spy gear, is expected to go for more than 3.5 million pounds ($5.5 million).

"This is the only genuine, 007 James Bond car," said Mick Walsh, Editor-in-Chief of Classic and Sports Car Magazine. "You know the reputation of James Bond. The bidding could go mad."

He said the fact the iconic Aston Martin has never been auctioned before means it will have tremendous appeal to collectors.

"It's never been on the market before, and with the classic car scene it's very important to see something new," he said. "There's going to be some serious action tonight."

He said it is likely the car will end up on public display, perhaps as the centerpiece of an upscale office complex in a city like Los Angeles or Moscow.

Bond's creator, newspaperman and novelist Ian Fleming, had originally placed Bond in a Bentley, which was his own personal car of choice. But the filmmakers put him in the Aston Martin, which then competed mainly with the Jaguar E-type for the lucrative British and American sports car market.

Aston Martin was seen as a heady mix of Italian design and British engineering.

The silver Aston Martin DB5 coupe up for auction was used by Connery to elude various villains in both "Goldfinger" and "Thunderball" — generally regarded as early classics in Hollywood's longest running and most successful film franchise.

It is closely associated with the Connery-era Bond films, which are often preferred by aficionados, who rate him above George Lazenby, Roger Moore, Timothy Dalton, Pierce Brosnan and the current 007, Daniel Craig.

The use of the Aston Martin, with a rear bulletproof shield that could be activated with the push of a dashboard button, provided a major boost for the British carmaker, which received worldwide publicity when the car was featured in "Goldfinger" in 1964.

It was the Bond movies that made Aston Martin a household name, even though its handmade cars remained far too expensive for most.

The car being auctioned by RM Auctions Automobiles of London is one of two Aston Martins factory-modified for use in the early Bond films, and it is the only surviving example.

The car, which contains an early version of the modern-day navigation system, is described as being in excellent condition. The other 007-modified Aston Martin was reported stolen in 1997 and has never been recovered. Many believe it has been destroyed. (AP)