Pink Floyd's Dark Side Of The Moon 'Best Album Cover' 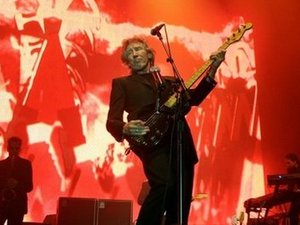 Pink Floyd's sleeve for the classic Dark Side Of The Moon has been named the greatest album cover of all time in a survey by British music website MusicRadar.com.

The image - featuring a ray of white light being split by a prism - triumphed over artwork for releases by acts such as The Beatles and The Clash.

The cover of Nirvana's Nevermind was runner-up in the poll of musicians and rock fans.

The list shows fans favor the artwork of vintage releases over contemporary work with most of the albums dating back to the 1960s and 1970s.

Floyd's top-ranked cover was one of many created for the band by design team Hipgnosis and featured no lettering. The 1973 album is one of the biggest sellers of all time.

Floyd also figure at number nine in the cover art list for their sleeve to Animals, released in 1977. The image features an inflatable pig tethered above Battersea Power Station, and is again attributed to Hipgnosis, although the band's bass player Roger Waters came up with the concept.

Sir Peter Blake's work on the Sgt Pepper's Lonely Hearts Club Band cover - a collage of famous faces gathered around The Beatles - is in third position.

The Fab Four's more simple plain white cover for their self-titled 1968 release - often known as The White Album - featuring the embossed name of the band is in seventh spot.

The newest album in the list is Rage Against The Machine's debut from 1992, only marginally younger than Nevermind from the previous year.

Will Groves, editor of MusicRadar.com, said: "The Dark Side Of The Moon is conclusive proof that one simple, enduring image is the winning formula when it comes to album artwork, particularly when it's harnessed to such an iconic musical work.

Any of the top 10 would have been worthy winners but the Floyd cover is a welcome reminder of a time when sleeve art meant much more than a jpeg a couple of hundred pixels wide in your iTunes library."