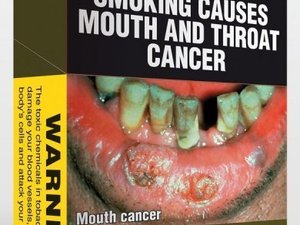 The tobacco industry on Tuesday threatened to slash the price of cigarettes if Australia goes ahead with plans to introduce plain packaging, saying more people will end up smoking.

Under proposed legislation, due to take effect next year, all logos will be removed from cigarette packaging, and tobacco companies must print their brand name in a specific font.

British American Tobacco launched a national media campaign against the "unproven plans" Tuesday, with its Australian chief executive David Crow warning of a boom in the black market.

"When all cigarette packs look the same and lose their trademarks and distinguishing features, counterfeiters will have a field day mass producing packets to smuggle into Australia," he said.

"Could (the price of) cigarettes halve over time? In the longer term, potentially yes," he added, saying the cheap prices "basically means more people will smoke, more kids will smoke".

"It's going to backfire and go bad and lead to more people smoking, which is just mad if you're sitting at a government desk," he told the Melbourne Herald Sun.

In a statement, Crow said there was no evidence that plain packaging would reduce smoking.

"What proof does the government have that their plain-packaging experiment will work?" he said.

"Can the government give a 100 percent guarantee that taxpayers' dollars won't be wasted on legal fees and compensation?"

Canberra says 15,000 Australians die of smoking-related diseases every year, and that tobacco use costs the country Aus$31.5 billion ($32.9 billion) annually in healthcare and lost productivity.

Although Australia would be the first country to mandate plain packaging for cigarettes, New Zealand, Canada and Britain have considered a similar policy.

The move has infuriated the industry, with Imperial Tobacco Australia already saying it planned to challenge the move on the grounds that it would impact profits.

British American Tobacco says the proposed legislation, which still needs to be approved by parliament, would infringe international trademark and intellectual property laws.

Health Minister Nicola Roxon said she expected big tobacco to fight in the courts, but vowed the government would not back down, adding that the excise could be raised if cigarette prices fall.

"I think we are in an extraordinary position where they say they want to protect their brands and profits but then they say they will slash prices to get people hooked onto smoking," she said.

"I mean this really is turning into a little bit of a nonsense argument from them.

"This (plain packaging) is one way that we know we can actually reduce the harm caused to people by smoking, we can free up money spent in the health system."

The Cancer Council said the industry "scare tactics" meant it was seriously worried.

"This desperate threat from the industry should send a clear message to anyone who questions the evidence on whether plain packaging will work," chief executive Ian Olver said.