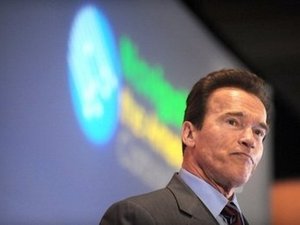 Movie megastar and former U.S. governor Arnold Schwarzenegger said Tuesday his wife Maria Shriver separated from him after he admitted to fathering a child with a member of the household staff.

"After leaving the governor's office I told my wife about this event, which occurred over a decade ago," Schwarzenegger, 63, said in the statement to the Los Angeles Times.

"I understand and deserve the feelings of anger and disappointment among my friends and family. There are no excuses and I take full responsibility for the hurt I have caused.

"I have apologized to Maria, my children and my family. I am truly sorry."

The Times did not give the name of the woman or her child to protect their privacy, but said she retired in January of this year after working for the couple for 20 years and left on good terms.

It said the 55-year-old Shriver, a daughter of the storied Kennedy clan, moved out of the couple's Brentwood mansion earlier this year after Schwarzenegger admitted paternity.

It quoted an unnamed source as saying that Schwarzenegger had taken financial responsibility from the start and was still supporting the child.

The former California governor and Shriver said earlier this month that they were separating after 25 years of marriage to take time to "work on the future" of their relationship.

Their marriage had come under the spotlight over the years, notably amid reports of his history of groping women during campaigning for the 2003 recall election which Schwarzenegger won, the LA Times reported.

Shriver, a former TV journalist, defended him at the time, and has stood by his side during his seven years at the helm of the Golden State, a term that ended when Jerry Brown succeeded him four months ago.

Austrian-born former bodybuilder Schwarzenegger, star of the "Terminator" blockbusters, had started to return to show business since he stepped down as governor, with plans for a "Governator" comic book and animated TV show.

The LA Times said neither Shriver nor the household staffer would comment on Schwarzenegger's statement. None of the three could be reached immediately.

In his statement, Schwarzenegger again called for privacy, asking the media to "respect my wife and children through this extremely difficult time."

"While I deserve your attention and criticism, my family does not," he said.