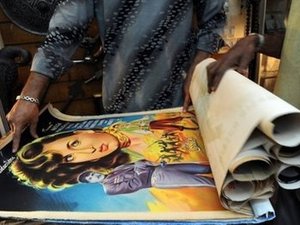 Times have changed in Bollywood from the days when all that was required to promote a film was a giant, hand-painted poster, a television or cinema trailer and the pulling power of a star actor.

Now, the popular Hindi-language film industry is harnessing the latest technology, hoping that the explosive increase in mobile phones and rapid take-up of the Internet will draw in much-needed audiences.

In the first move of its kind, the upcoming Hrithik Roshan film "Zindagi Milegi Na Dobara" (You Only Live Once), will be promoted only via mobile phone and online.

Film studio Excel Entertainment has tied up with one of India's leading mobile phone companies, Aircel, to push two three-minute trailers for free to its 55 million subscribers.

Producer Ritesh Sidhwani said such technology enabled more targeted marketing for films, which are facing increasing competition from other forms of entertainment and are no longer guaranteed healthy box-office returns.

"We felt we needed to go beyond voice to promote 'Zindagi Milegi Na Dobara' and therefore we came up with this idea," he told a news conference in Mumbai on Sunday.

"I think it will work fantastically because mobile reach is much wider... Many people and especially the young crowd watch promos on the Internet, so we felt it was better to go with this plan."

In addition to the mobile phone promos, the film, which is due out on July 15, will have a dedicated page on Facebook -- now standard alongside a film website and trailers on the file-sharing website YouTube.

Mobile marketing makes business sense for Bollywood, as it has done for Hollywood in recent years.

The Indian film industry as a whole has seen revenues slump by 20 percent in the last three years, and tapping new income streams has been seen as a key to future growth.

India is also the world's fastest-growing cellular market and the second largest after China.

According to the Telecom Regulatory Authority of India, there were 752.2 million mobile phone subscribers as of December 31, 2010 -- a massive 43.2 percent increase on the same period the previous year.

The IT research company Gartner Inc. last year predicted that 82 percent of India's 1.2 billion population would have a mobile phone by 2014, mainly due to a focus on the rural market and lower handset prices.

Indian film studios have used mobile phones before to promote films, but this has mainly been restricted to music and ringtone downloads or simple text message alerts.

"It's the first time it's been done and I think it's a great idea," said Taran Adarsh, a film critic with the popular bollywoodhungama.com web site and an avowed technology fan.

"You need to reach out to the consumer and what better way than a cell phone?" he told Agence France Presse, predicting that other studios will follow suit.

"The television is an immovable gadget. You can't carry it with you. But your cell phone is with you 24/7. If you want to access something -- it could be a news report or a promo -- you can do it."