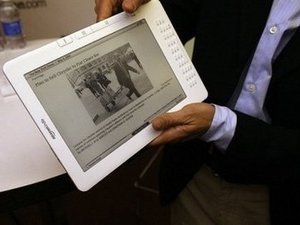 "We had high hopes that this would happen eventually, but we never imagined it would happen this quickly," Bezos said. "We've been selling print books for 15 years and Kindle books for less than four years."

The Seattle, Washington-based Amazon said that since April 1, it was selling 105 Kindle e-books for every 100 print books, hardcover and paperback combined.

The company said it had sold more than three times as many Kindle books so far in 2011 as it did during the same period last year.

Amazon began selling print books in July 1995 and introduced the Kindle in November 2007.

Amazon does not release sales figures for the Kindle e-reader.