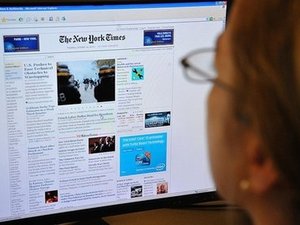 Google on Friday had stopped digitizing old newspapers as publishers sought to make money off story archives instead of having them hosted free online.

People will still be able to find newspapers already converted to digital format in the Google News Archives at news.google.com/archivesearch but the collection won't grow.

"We work closely with newspaper partners on a number of initiatives, and as part of the Google News Archives digitization program we collaborated to make older newspapers accessible and searchable online," the Internet firm said.

"We don't plan to introduce any further features or functionality to the Google News Archives, and we are no longer accepting new microfilm or digital files for processing."

Google has digitized more than 3.5 million issues of more than 2,000 different newspaper titles, with the earliest being a March 23, 1752 edition of the Halifax Gazette in Nova Scotia.

Digital copies of archived newspapers will be given to respective publishers that will be free to host the issues on their own websites.

Archived publications include the London Advertiser from 1895, L'Ami du Lecteur at the turn of the century, and the Milwaukee Sentinel from 1910 to 1995.

Google launched the project in September of 2008 in a partnership with publishers to "make more old newspapers accessible and searchable online."