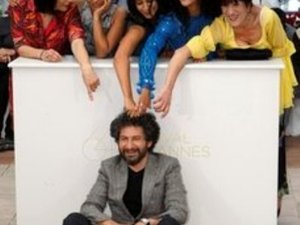 In a remote village in North Africa, women use the only weapon they have — sex — and go on a "love strike" that challenges traditional gender roles.

Director Radu Mihaileanu says he sees the fictional gender revolt depicted in his new movie "The Source" as crucial to the success of popular uprisings that have toppled dictators in Tunisia and Egypt this year and still smolder across the Arab world.

"The second revolution that's needed, it seems to me, is one in the home, that will bring about gender equality in the private sphere," Mihaileanu told reporters Saturday at the Cannes Film Festival, where the movie is competing for the top prize, the Palme d'Or.

Mihaileanu said the movie was inspired by a decade-old news story about women from a village in Turkey who, fed up with their arduous traditional task of fetching water from a distant well, started withholding sex.

"(This story) showed them in such a wonderful light. These women are combative, filled with light and humor," said Mihaileanu, adding that although he had fallen in love with the story, he didn't initially plan to make the movie himself.

"As I'm neither a woman nor an Arab, I didn't feel legitimate," said the Romanian-born French director behind the 1997 hit "Train of Life" and 2004's "Live and Become."

At first, he thought he would produce it and find an Arab woman filmmaker to direct it.

"But I didn't find one, and as I was pitching it, everyone kept telling me, 'you tell this story so well, why don't you make it?' So in the end I did," he said.

Accuracy and believability became his holy grail, in everything from the plot line to the sets and costumes. Cast and crew spent a month in the Moroccan town where the movie was shot, experiencing village life and learning the local dialect.

The cast was chosen from across the Arab world and includes Algerian diva Biyouna, Palestinians Hiam Abbas and Saleh Bakri and rising French star Hafsia Herzi, whose parents are from Tunisia and Algeria. Still, only one of the principal characters is played by a Moroccan, so the cast had to work with coaches to get the accent down.

"I used to speak Algerian, but I'd lost nearly everything," she said.

Still, she said the story had touched her deeply.

"For me, this film is an ode to love, it's a film about altruism, about other people, about our capacity to love one another, to listen to and understand one another," Bekhti said. "I think that's one of the biggest problems in the world — we don't look at one another, we don't listen to one another."