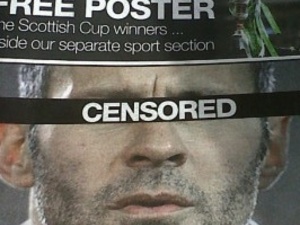 Britain's privacy rules are under assault by rambunctious journalists, Twitter users and even sports fans, as thousands defy a judge's order keeping the name of a well-known soccer star secret.

The disclosure of the sportsman's identity has made a mockery of recently introduced rules protecting public figures' privacy, raising questions about whether it was desirable — or even possible — to order journalists to keep a secret in an age where a single rogue tweet can be read around the world.

British Prime Minister David Cameron acknowledged the situation, saying it was "rather unsustainable when newspapers can't print something everyone is talking about." He promised a rethink of how the country balanced privacy and freedom speech.

The sportsman, whose name The Associated Press knows but is prohibited to publish, turned to the British courts to keep his name from being linked to that of a reality show contestant with whom he is alleged to have carried out an affair.

He sought anonymity, but the effort backfired as the case increasingly became a touchstone for arguments over what Britons know as "super-injunctions," sweeping legal measures that ban journalists from writing about something, or even writing about the fact that they can't write about something.

As civil libertarians debated the wisdom of super-injunctions, the soccer player's name increasingly spilled out into the public domain. And every time his legal team tried to plug a leak, several more sprung.

Imogen Thomas, the reality television show constant with whom the athlete was alleged to have carried out the affair, went to Britain's High Court to try to overturn the injunction. She was defeated, but a mysterious Twitter account allegedly revealed his name anyway, a move that swiftly drew national attention.

With the name increasingly being bandied about on soccer forums and in foreign publications, the media embargo was strained to the breaking point.

On Sunday, Scotland's Sunday Herald became the first British newspaper to flout the injunction, publishing a thinly censored photograph of the soccer star on its front page. Only his eyes were blacked out, and beneath the sportsman's clearly recognizable face, the Herald wrote that "everyone knows" this was the star "accused of using the courts to keep allegations of a sexual affair secret."

In an editorial, the Herald said it was "unsustainable" for newspapers not to be able to print information that is available on the Internet.

The paper quickly noted that it was not accusing the sportsman of carrying out an affair, but said that "whether the allegations against him are true or not has no relevance to this debate."

"The issue is one of freedom of information and of a growing argument in favor of more restrictive privacy laws," the paper said.