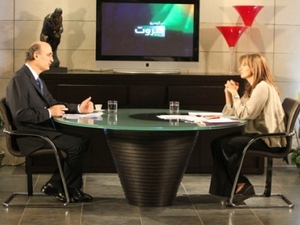 Geagea described Nasrallah's stances as threats against the Lebanese State, noting that the State is "the side mainly dealing with U.N. investigators."

In an interview on Al-Arabiya television, Geagea urged President Michel Suleiman and Premier Saad Hariri to call an urgent ministerial meeting "to remind about the ministerial Policy Statement, which had legitimized the tribunal."

"The indictment should be faced with the logic of the indictment, and not as Sayyed Hassan Nasrallah responded today.

"We are with stability. This is why we are holding onto the Special Tribunal for Lebanon," Geagea added.

On the other hand, the LF leader said that "the issue of Hizbullah's arms is very worrying."

"Hizbullah has regional reach, which puts us in the circle of danger," he added.

Geagea said he was not "surprised" by the massive welcoming Iranian President Mahmoud Ahmadinejad had received during his recent visit to Lebanon.

"The problem was with the political speech delivered by him at Al-Raya Stadium" in Beirut Southern Suburbs, he added.

Geagea voiced his rejection of the recent calls for the resignation of PM Hariri, wondering about what the "other solution" might be.