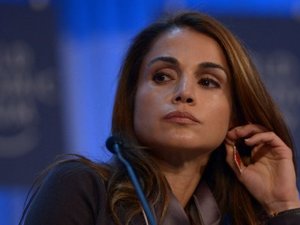 The premiers of Egypt, Lebanon, Libya, Tunisia and the Palestinian Territories will discuss transformations in Arab countries, while U.S. Senator John McCain is taking part in a panel on the future of conflict-torn Syria.

Abdullah's speech comes after preliminary election results Thursday showed pro-regime loyalists and independent businessmen set to sweep a parliamentary vote in Jordan. The poll was touted as a focal point of pro-democracy moves by the king, but was shunned by Islamists who want wholesale reforms.

On Thursday, U.N. leader Ban Ki-moon used his trip to Davos to make a fresh appeal to members of the Security Council to overcome their divisions and find a solution to the civil war in Syria.

Ban said it would be an "abdication" of the world body's responsibilities if it fails to unify over the crisis that has claimed more than 60,000 lives.

"It will be essential for the Security Council to overcome the deadlock, and find the unity that will make meaningful action possible," Ban told the annual gathering of the global elite in a Swiss ski resort.

"The alternative -- letting the sides fight it out, resigning ourselves to Syria's destruction with all its regional implications -- is too costly and unacceptable," he added.

"That would be an abdication of our collective responsibility to protect. The world, and above all the Security Council, must uphold its responsibilities."

Egyptian Prime Minister Hisham Qandil also spoke Thursday of the need for his country to focus on its economy now that the political transition is moving forward two years after the fall of Hosni Mubarak.

"Two years ago the Egyptian people stood against the tyrant of Egypt, and in only 18 days they put down Mubarak and his regime and started a new era," he told journalists.

He said that following the election of a civilian president, the Islamist Mohamed Morsi, and a constitutional referendum Egypt would have parliamentary elections in two or three months.

"After that we have completed or ended the transition with all the democratic institutions in place. On the other hand, we have to big time work on the economy," he said.

Europe has been at the heart of discussions in Davos this week, with British Prime Minister David Cameron on Thursday insisting he was not turning his back on Europe after unveiling plans for a referendum on whether to continue Britain's membership in the EU.

European Central Bank chief Mario Draghi will address the forum Friday on "The Future of the Euro", while economists and business leaders will discuss ways to revive the global economy.

I don't understand the photo with this article