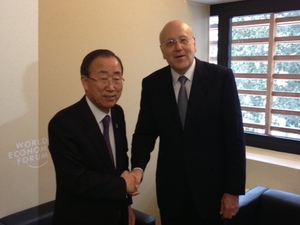 Miqati met with Ban on the sidelines of the World Economic Forum in the Swiss resort Davos.

The talks focused on “the situation in the Middle East and the ongoing cooperation between Lebanon and international organizations on the issue of Syrian refugees in Lebanon,” his office said.

The prime minister and Ban also discussed the preparations for the donor conference in Kuwait on January 30.

Miqati said on Twitter he “had a progressive meeting” with Ban who is “hoping a good success for the international donor meeting in Kuwait next week.”

In addition to his meeting with the U.N. secretary-general, Miqati held talks with his counterparts from Egypt and Georgia with whom he discussed bilateral ties.

He also held a separate meeting with President of the Iraqi Kurdistan Region Massoud Barzani.

Miqati is set to address the global elite in Davos on Friday.

the filthy zionist scum want to "prove" that i'm not lebanese, by pushing he value of harriri family.

the filthy zionist scum think that harriri family is the "ruler" of half of beirut, saida and trablus.

i guess when you are born in 1993 you are still young naive and pretty retarded (the last one will stay until you die).