Japan's Softbank to Back Solar Plan 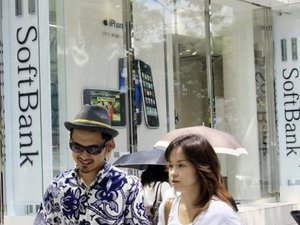 Since Japan's March 11 earthquake and tsunami sparked a nuclear emergency, Son, Japan's richest man, has been a high-profile advocate for a shift away from atomic power and toward renewables such as solar, wind and geothermal.

He has proposed building a string of solar facilities that would cost about eight billion yen ($97 million) each as part of an "Eastern Japan Solar Belt" that would also help revitalise tsunami-hit areas.

It had so far been unclear whether Softbank, the sole supplier of Apple products in Japan, would be an investor, the Nikkei daily said.

Softbank plans to put up about 10 percent of the funding, with local governments to provide about 100 million yen for each facility and Softbank likely to borrow the remainder from banks, the Nikkei reported.

The firm is expected to keep the solar power operations separate from its consolidated earnings since there is little connection with its main telecommunications business, the report said.

If the project moves forward, Softbank will likely adopt solar panels produced by Sharp Corp., with which it has dealings in mobile phones.

Debate has picked up in Japan on a shift toward clean and renewable energy sources since the Fukushima nuclear plant was hit by a monster tsunami causing radiation to leak into the air, soil and sea.

Prime Minister Naoto Kan has scrapped a national energy policy plan under which nuclear reactors would meet half of Japan's energy needs by 2030 and advocated making renewables "key pillars" of the energy mix.

At this week's Group of Eight summit in Deauville, France, he is set to outline a "Sunrise Plan" to install solar panels on all suitable buildings and homes in Japan by 2030, the Kyodo News agency has reported.